GOOD NEWS FOR SNOWMOBILING IN ONTARIO 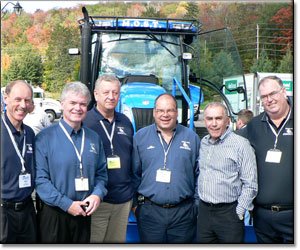 Organized snowmobiling in Ontario is alive and well heading into the 2007 season, with snowmobile tourism providing well-documented economic benefits for rural and small town Ontario.

This economic activity earned a strong commitment from the Ontario Liberal Party at the 40th annual convention of the Ontario Federation of Snowmobile Clubs (OFSC) last weekend in Huntsville.

At the same time, Sorbara also made a commitment to work with the OFSC to develop long-term sustainable funding for OFSC tourism trails, which contribute $1.2 billion dollar in economic impact for rural and northern Ontario each winter and over $112 million annually in provincial tax revenues. Sorbara also promised that the Ministry of Tourism would take the lead in working with the OFSC.

“We have been working with several ministries while briefing the McGuinty government throughout the past year and we have backed our efforts with considerable documentation, including funding proposals for the 2007/08 season and beyond,” said OFSC Executive Director Paul Shaughnessy. “So we are very pleased to hear this good news from the Ontario Liberal Party.”

At their 40th anniversary celebration, the delegates adopted a new Trails Strategic Plan and also voted to recommend no increase in Snowmobile Trail Permit fees for the 2008/09 season. Including the upcoming winter, this will be the 4th consecutive year for Ontarians to go snowmobiling on over 41,000 km of OFSC trails at 2005 permit prices.

The Ontario Federation of Snowmobile Clubs is dedicated to providing strong leadership and support to member clubs and volunteers, to establishing and maintaining quality snowmobile trails which are used in a safe and environmentally responsible manner, and to furthering the enjoyment of organized snowmobiling.

Supertrax Onlinehttps://www.supertraxmag.com
Check back frequently for new content and follow us on social media!
Previous articleOFSC “GO SNOWMOBILING SHOW” THIS WEEK!
Next articleIs Ski-Doo Walking Away From Hyper-Sled Category?