Is Ski-Doo Walking Away From Hyper-Sled Category? 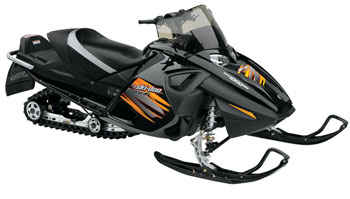 Ski-Doo dropped a Press Release early this summer covering its intent to discontinue the 1000cc Mach-Z and Mach-Z LT after the 2008 model year.

Another release followed announcing the Mach-Z and the Mach LT were unavailable in model year 2008.

This means you can’t get one because there are probably non-current 1000s on the ground at dealers that will meet demand – if you don’t mind hunting.

We knew something was up at Snow Shoot when a 1000 was nowhere to be found.

So is Ski-Doo walking away from the Hyper-Sled category? In the short term it might appear that way, but our highly accurate laser guided tape measure indicates the 172 HP 1000cc, SDI, EPA certified Rotax twin used in the Mach-Z will fit (Yeah, we’re shaking too) into the feathery REV XP chassis. Hoo boy!

Can you imagine what an XP based 172 HP snow rooster would pull like?

While there’s no official word on this, we’re pretty sure Ski-Doo will not walk away from the highest performance category in the biz and tank a multi-jillion dollar EPA certified engine.

This mill could easily deliver 20mpg in the XP chassis while effectively breaking the sound barrier down Kevlar Lake.

Supertrax Onlinehttps://www.supertraxmag.com
Check back frequently for new content and follow us on social media!
Previous articleNew Battery Technology Could Apply To Powersports
Next articleVisit Supertrax Booth This Weekend in Toronto