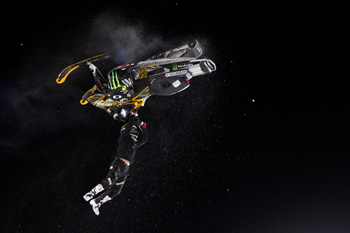 The crackling whine of two-stroke engines and smell of premix at 8,000 feet quafted off into the distance Sunday night at X Games 15 with the running of the fifth and final snowmobile event, Best Trick.

As they have been since day one, Monster Energy athletes were up to the task, led by Heath Frisby’s bronze medal in the event.

Frisby busted out his industry-best tsunami back flip, and landed without his hands on the bars for good measure. The judges approved, giving him a 86.0 score on his first of two runs.

“It’s one of the craziest feelings poking out underneath the sled,” said fellow Monster Energy snowmobiler and ESPN color man, Chris Burandt on Frisby’s jump.

Visit monsterenergy.com for more on Frisby and the rest of the team as they compete in Winter X Games 15, plus coverage of Monster’s activities during the four-day event.