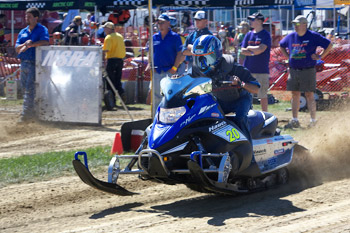 Jones won championships in Stock 600 Single Pipe aboard an FX Nytro, Stock 600 aboard his Apex, 600 Improved aboard a modified Apex, and Stock 500 on an RS Vector.

This is the second consecutive year that Jones has cleaned up in all four classes aboard Yamaha four-strokes, this season including the new 2009 FX Nytro XTX, which directly contributed to his Stock 600S title.

With a full schedule of racing both days, Jones competed in more than two dozen individual races as the different classes progressed through qualifying and the finals.

Sunday proved even better for Jones as he chalked up pro wins in Improved Stock 600 on his modified Apex and Stock 500 on the RS Vector, while Burzinski added another win for an RS Vector in Semi Pro Stock 500. Yamahas also grabbed six additional pro podiums and five more semi-pro podiums over the two days.

Several thousand spectators were on hand over the weekend to cheer on drivers, see the new sleds and to enjoy the swap meet. Yamaha stepped up the show by giving over 130 demo rides to potential buyers on new Yamaha models.

The success of the event added to the excitement – and also brought extra pressure for the pro drivers. “I was ahead in points going into the weekend but had to make the final in all four to win the titles,” Jones said afterwards. “It has been a great year. My favorite sled this season has been the Stock 600 Apex because it’s so easy to drive, but the new FX Nytro XTX really surprised me – it’s the hot ticket with that long 144-inch track. It accelerates hard! You can tell that Yamaha leads in 4-stroke technology because they are still the only four-strokes in the finals. While some of our two-stroke competitors blew up Saturday and were getting new pistons overnight, our Yamahas were just so consistent – nothing ever goes wrong with them!”

Congratulations to all of our successful Yamaha racers – we had a great NSRA grass drag season!!