Cat Finishes Strong in I-500 Cross-Country 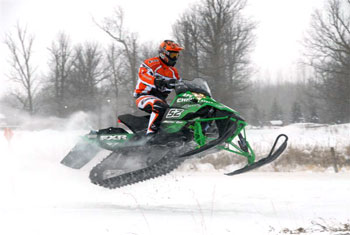 The USCC Red Lake I-500 cross-country lived up to its legend, challenging the world’s toughest terrain racers with deep snow, driving winds and a rugged assortment of ditch, river and woods.

Team Arctic racers rose to the challenge, delivering a record-setting performance that included seven of the top-10 finishers and six individual class victories.

“To put seven racers in the top-10 of the Pro Class says a lot about our pro racers and Sno Pro 600 race sled,” said Mike Kloety, Team Arctic Race Manager. “And with wins in six of the individual classes, it’s clear we have great depth.”

D.J. Ekre’s performance in Pro class was dramatic and great. Sitting in second place just 49 second out of the lead after the first of three days, Ekre suffered the fate of having to lead the second day’s run.

The problem: blowing snow filled the ditches prior to race start, and Ekre had to break trail through the loose (and slow) snow.

“It was tough to see and it was slow being the first racer on course,” said Ekre. “That’s the luck of the draw, but it definitely slowed me down.”

Ekre’s Christian Bros. Racing teammate, Brian Dick turned in a blistering performance on the second day, setting the fast time and putting him in a four-rider fight for the win on the third day.

On the final day Ekre and Dick went for broke, riding at pace that thrilled the hundreds of people gathered along the roads and following in automobiles.

With Dick down a few mph on top speed, Ekre broke away to move into second place and got within sight of the leader and eventual winner, Bryan Dyrdahl.

Dick finished a solid fourth, followed by teammate Dan Ebert who was competing in his first-ever I-500.

Dick’s 58-year-old father, Paul, once again proved his mettle to win the Legends 50-plus class, adding yet another highlight to his long career of cross-country success.

Other class winners include Jolene Bute in Womens, Adam Brandt in Trophy 600, Jon Arneson in Masters 40-plus, Marty Feil in Fan 600 and Brian Carey, Sr., in 440.

Commenting on the team’s success, Kloety had nothing but praise for the Sno Pro 600 race sled: “To put so many racers high in the standings and finish a race like this proves our sled is tough, fast and great in the rough stuff.”

The next race on the USCC cross-country race schedule is the Ada 100 in Ada, Minn., on Jan. 31. See www.uscc.com for more info.

Supertrax Onlinehttps://www.supertraxmag.com
Check back frequently for new content and follow us on social media!
Previous articleSupertrax RSS Feed Now Active
Next articleNEVER GIVE UP ON A SLED