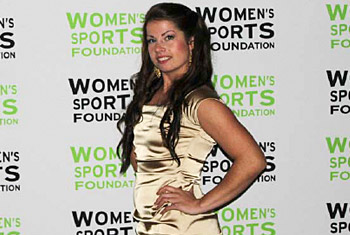 BRP’s Ski-Doo Freeride Ambassador Ashley Chaffin was invited to attend the annual Salute to Women in Sports Awards Dinner this past week and was one of the athletes considered for her performances over the past winter – many caught on film – by the Women’s Sports Foundation.

The prestigious dinner is held in New York each year to honor the best female athletes in the world for individual and team performances, inspiration, contribution and courage.

Ashley was the first woman snowmobiler to be invited to the event and has helped blaze a trail for others to follow.

“This was such an absolutely awesome experience to come here with all these superstars of the sports world.” said Chaffin. “Being the first snowmobiler means a lot to me and I hope many others can follow, or I can ramp it up and return again”.

There are five awards presented yearly – Yani Tseng took the top individual honor as the youngest golfer to win five major titles in one year being named Sportswoman of the Year, Abby Wambach grabbed the award in team sports for her outstanding play in women’s soccer, the Visa Women’s Ski Jumping Team received the Wilma Rudolph Courage Award, for the sport’s accomplishments and the athletes’ 12-year push to be allowed to compete in the Olympic Winter Games.

Visa was presented the Billie Jean King Contribution Award, which recognizes an individual or organization that demonstrates a lasting commitment and dedication to the growth of sports.

Congratulations to Ashley – we’re proud of her accomplishments and proud to call her a Ski-Doo Freeride Ambassador.