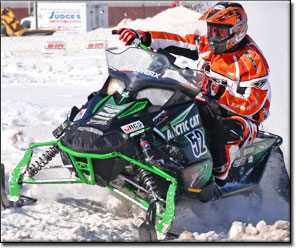 Things couldn’t have gone much better for the Team Arctic cross-country racers this past weekend at the USCC AMSOIL Triple Crown 300 race in Hayward, Wisconsin.

Not only did Arctic Cat riders come out on top in Pro 600, Pro Open, Semi-Pro 600 and Semi-Pro Open, D.J. Ekre locked up the points and took home the Triple Crown title.

The Hayward track was described by USCC President Pat Mach as a “snow lemans” course.

It was about four miles in length, filled with bumps and packed with right- and left-handed switchback turns. Going into the Pro 600 final, Ekre was focused on the Triple Crown.

“I knew I just needed to finish near the front and get the points,” said Ekre. “I wanted to win, but I wasn’t about to take any risks out there. We had our setup dialed in and the 600 Sno Pro ran as strong as ever this weekend. I don’t want to say it was easy, but things went really well for us.”

The Hayward 300 was the final race in the Sledhead 24/7 AMSOIL Triple Crown series and Ekre notched wins at the first two events, so he had a hefty points lead in the class.

“Winning the Triple Crown is quite an accomplishment,” he said. “Arctic Cat has always been serious about doing well in cross-country and I’m happy I was able to bring home the title for them.”

Not only did Team Arctic riders sweep the Pro and Semi-Pro classes at Hayward, they swept the top four spots in Pro Open with Ryan Simons in first, Ekre second, Jesse West third and Brian Dick fourth.

In Pro 600 Simons took the win with Dick in fourth, Ekre fifth, West sixth while Dan Ebert made his Pro debut after winning both Semi Pro classes, finishing seventh.

Semi-Pro riders Bryce Buchanan and Brandon Gerszewski made it a Team Arctic podium sweep in Semi-Pro 600.

“Team Arctic had a huge weekend in Hayward,” said Assistant Team Arctic Race Manager Mike Kloety. “Sweeping all these classes on the new Sno Pro 600 speaks volumes for its durability and what can be accomplished on it by our racers.We hate to see the season end when you have this kind of momentum. But if it has to end, then going out on a high note with Ryan sweeping the Pro classes, Dan sweeping the Semi-Pro classes and D.J. winning the Triple Crown is the way to do it.”

Other Team Arctic wins included Jolene Bute in the Women’s class, Cole Lian in the Junior 10-13 class and Sara Larson in the 120 Stock class.

In all, Team Arctic riders won 7 out of 18 classes at Hayward.