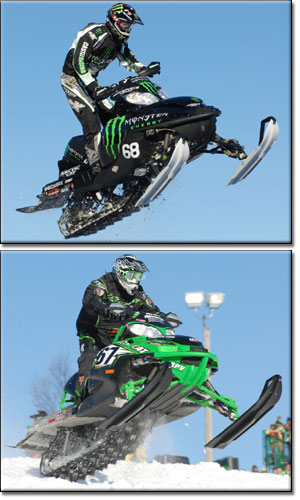 It was all Arctic Cat all the time at the 2007 Winter X Games. Held in Aspen, CO, January 25-28, Cat men dominated the snowmobile events at the annual action sports celebration.

In snocross, Team Green riders claimed three of the top four positions: Tucker Hibbert struck gold, Ryan Simons earned silver and Carl Schubitzke put in a powerful performance for fourth. But that wasn’t all. The next night, Chris Burandt won the inaugural Winter X Snowmobile Freestyle contest with a performance that included being the first competitor able to backflip his Sno Pro 92 feet over the huge gap.

It was obvious from the very first snocross practice that Arctic Cat would be a Winter X force. Both Hibbert and Simons laid down blazing times and then cruised to easy victories in their Round 1 heats, which transferred them directly to the final.

They were joined in the main by Schubitzke and Matt Piche, who qualified via Round 2. Schubitzke won his Round 2 qualifier after a pair of great passes, and Piche – racing with a broken middle finger on his right hand – made a late move in his moto for second place.

“It was a great feeling sitting on the starting line knowing I had the best sled,” Hibbert said after collecting his second Winter X gold and sixth medal overall. “My Arctic Cat suspension worked so well in the bumps and I’m excited to see the Cats up front.”

“I’ve got a great team behind me and they had my machine running so fast,” said HJ Racing’s Simons, who is the only competitor to make each of the past three Winter X Snocross finals (he finished fifth in both ’05 and ’06).

In Snowmobile Freestyle, Chris Burandt laid down a slew of big tricks for the sport’s first Winter X Games gold. His runs were highlighted by a pair of backflips performed over a 90-foot gap.

“People might not be able to relate to what I do, but they can relate to riding a snowmobile,” Burandt said. “So if my Arctic Cat suspension can handle falling 40 feet out of the sky, just think how easily it can handle a rough trail.”

“Our equipment proved itself this week,” said Arctic Cat Race Manager Russ Ebert. “We’re fortunate to have such talented riders and support staff, and they put our vehicles to the test on this very challenging course. I was more than pleased with our engine and clutch performance; these components were spot-on and held up to the extreme conditions. To come away from Winter X with two golds and three medals is quite an accomplishment for the Arctic Cat team and I’m really proud of them.”