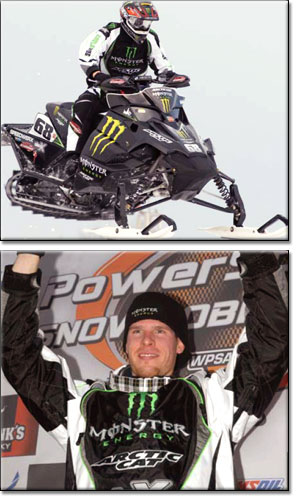 Team Arctic racers aboard the all-new Arctic Cat Sno Pro 600 delivered a powerful message to the competition at the Duluth Minnesota National snocross: We’re here to win. And win they did, including an emphatic victory by Tucker Hibbert in the Pro Open class.

Team Arctic race manager Russ Ebert said, “We are really proud of Tucker and his Pro Open win. This is the premier class to showcase the OEMs latest equipment and your abilities to ride it. You could see Tucker’s confidence building as the weekend progressed and we knew it wouldn’t take him long to adapt to our new chassis.”

With little to no seat time prior to the opening race of the WPSA series aboard a completely new race sled, Team Arctic racers and teams spent much of their time learning about tuning the Sno Pro 600, making huge gains in suspension and handling as the weekend progressed.

“The Sno Pro 600 performed better than we could have hoped for,” said Brian Dick, the Arctic Cat Project Engineer responsible for the newest race sled. “It’s durability was excellent, as was the power and rider position. A few more weeks of testing and tuning will produce major improvements. Additional time spent on the all-new Sno Pro might prove tough for the competition. We are competing and beating sleds that have already seen competition; one as many as three years. That speaks volumes for our new Sno Pro.”

With a race program that focuses on all forms of competition, including cross-country, hillclimb, drag, oval and enduro, Team Arctic personnel were more than pleased with the Spirit National results.

“We support all forms of racing, which means we can’t match the entries that some of the other brands push in snocross,” said Ebert. “Beyond our Pro and Semi Pro teams, we have a very talented group of Sport Super Stock (SSS) riders. Dusty Miller got first place and Cody Thomsen landed on the podium twice with a second and third in both SSS classes.

To accomplish that aboard an all-new sled is simply awesome! It’s going to be a great race season. The next chance to get a glimpse of the Team Arctic snocross racers aboard the new Sno Pro will be in Shakopee, MN at Canterbury Park, January 11-13.

For more information on Team Arctic racers, please log on to ArcticCat.com.