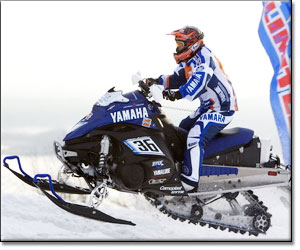 “The Minocqua team has Yuji working closely with the Yamaha engineers to develop ideas for possible future production,” says Marier. “They will be focused on product development closely based on the FX Nytro and hit select races depending on their testing goals.”

“We are determined to face the challenges head-on,” added Saito. “We will continue to compete against the 2-stroke sleds on the race track as we continue to develop our 4-stroke-powered FX Nytro.”

Nakazawa, who has been working with Yamaha on the four-stroke project for three years, says “The sled gets better all the time. I raced Pro Open at Duluth, but didn’t make the final. I went 6-6-3 over the weekend. In the last round I got the holeshot and led until I was passed by two riders to finished third. I really like the FX Nytro racer, and look forward to racing at Park X and the next national at Shakopee. The finale at Lake Geneva will be really great for us because the four-stroke engine makes such good power that it will work very, very well on the uphills.”

Supertrax Onlinehttps://www.supertraxmag.com
Check back frequently for new content and follow us on social media!
Previous articleYamaha Factory 4-strokes: Round One In Duluth
Next articlePolaris Switchback 600: Off-Trail Handling