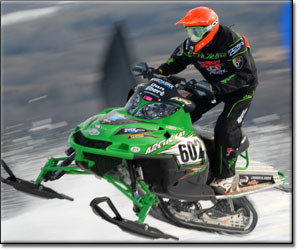 Even though the World PowerSports Association (WPSA) hasn’t held a National snocross event since the season-opener at Duluth, MN, back in November, racing has continued. So has the Arctic Cat domination.

The first order of business in Brainerd was to conclude a Regional race that began Dec. 30th at Park X in Hill City, MN. The Pro division was all Arctic Cat. Led by Ryan Simons’ sweep of the three classes, Cat men scored seven of the nine podiums spots.

Carl Schubitzke nabbed a pair of top-threes and Dan Ebert and Matt Piche – Semi-Pro racers who bumped up to Pro for the Regional – tallied one apiece. And just for good measure, Arctic Cat racers won all three Park X Semi-Pro finals.

“It always feels good to win, and it’s a definite confidence boost,” said Simons, a Cat/HJ Racing driver who had a pair of top seven finishes at the Duluth National. “I’ve felt good on the sleds all year and I think our results show that.”

For Simons, the great results continued in the BIR Northstar Regional when he captured the Pro Stock class. That victory was part of yet another Arctic Cat podium sweep – Schubitzke and Piche followed Simons home.

The highlight of Piche’s excellent weekend came in Pro Open, when the Christian Brothers racer claimed his first Pro win, leading Schubitzke to the checkered. “I just feel comfortable on our mod sled,” Piche said. “It really jumps off the line and it’s quick out of corners.”

“We felt like we had a lot of momentum after doing well at Duluth and it was tough not to race much in December,” said Arctic Cat Race Manager Russ Ebert. “I’m proud of the guys for staying focused through the break; they were certainly ready to go at Brainerd and all of our crews had the sleds in good shape. I know everyone is looking forward to the next National.”

They won’t have long to wait: The next WPSA event will take place January 12-14 right back at the Brainerd International Raceway.

A double National, four Pro finals will be held throughout the weekend. After that, the National series takes a brief respite while teams prepare for the Winter X Games in Aspen, CO, at the end of January.