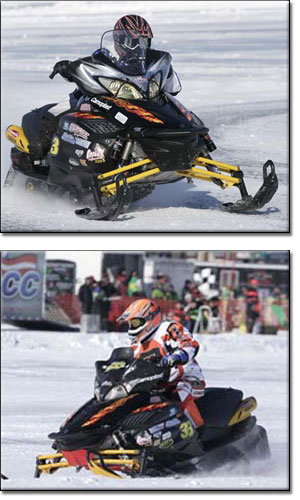 The Yamaha Apex was the snowmobile to beat in the Pro Open and Semi Pro Open classes of the USCC Mille Lacs 300 in Garrison, Minn. on Saturday and Sunday, Feb. 10-11. Only nobody could.

Intrepid Corey Davidson entered the race with his leg still in a cast from a December motocross crash, then scored 2-1 finishes in the two-race format to take the Pro Open overall win on his Davidson Racing Apex RTX.

Teammate Travis Hjelle added to the spoils by winning both legs of the Semi Pro Open event, finishing first overall by just two seconds after 40 miles of racing. He also scored a fine third overall in Semi Pro Stock with 5-3 race finishes over the weekend.

“I was the only driver in the Pro Open class on a four-stroke, and the Apex really had an advantage in power and top-end speed over the two-strokes,” Davidson said after the event. “Besides the awesome power, it has great engine braking when you’re backing out of it going into the corners. The Apex handled just perfectly all weekend.”