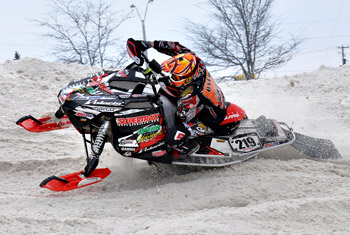 This past race weekend was the first return back into Ontario for the Supertrax/Polaris/Byers Motorsports team since the CSRA season opener.

The Lindsay Exhibition grounds played host to the Amsoil Kawartha Cup, CSRA National Round 4. With the vast amount of snow that Central Ontario has gotten this winter the CSRA crew was able to build the best track that they have ever had here.

In Saturdays Pro-Open races, the skys we open and the sun was shining for a great day of racing. With 10 Pro racers this weekend, all racers we combined into 1 moto making every race seem like a Main event race.

Moto 1 was an intense race with 4 races running tight together battling back and forth with Jamie finishing 6th at the checkered. In Moto 2, Jamie had a great run making a hard charge on the last straightaway making the pass for 6th at the flag. Getting a front row start in the final, Jamie found himself running in the Top 5 before getting together with another racer, flipping the sled over. He was able to salvage an 8th place finish.

Sunday was an overcast/light snow day in which made for some visibility issues in some sections of the track. Jamie grabbed a 6th place finish in Moto 1. Moto 2 was very interesting to say the least having 3 restarts.

After a rider jumped the start the first go around we tried for a second time. Jamie got a great start and was running 3 wide for the lead down the front stretch to come over the final jump and find the groomer still on the track. Jamie had to lock up the sled, throw it sideways and eject to prevent running into it.

For the 3rd restart, he didn’t get the start he wanted finishing 7th. In the final, Jamie had a sled cartwheel in front of him on the start setting him back. He ran a strong race crossing the checkered’s in 8th.

“This weekend felt the best so far this season. We’ve got suspension figured out and felt great physically,” Jamie said after the weekend. “This is going to be the turning point in our season, we just need a little bit of luck and get to the front on the starts.”

The team will be travelling this weekend to the 32nd running of the Grand Prix de Valcourt for CSRA National Round 5. The event attracts racers from 4 snowcross circuits (ISOC, CSRA, ESC & SCM) to compete as part of their schedules.

The Grand Prix is the largest event that Byers Motorsports attends with Ice Oval Racing, Snowcross, FreeStyle & Drag races going on throughout the weekend.