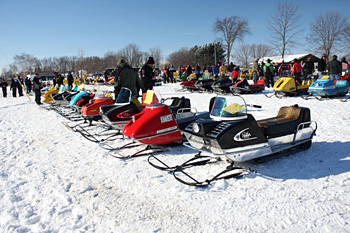 Whew! The weather gods provided just enough snow and ice depth to pull off the 22nd Annual “World’s Largest” classic snowmobile event in the Twin Cities of Minnesota the last weekend in January.

With winter weather the warmest in recent history, the Ride-In Committee fretted. However, in the nick of time, a cold snap increased ice depth to at least 12″ and provided adequate snow cover on the ice for the trail ride, ice drags and ice oval racing.

On the lake, it was clear that many participants were out for their first vintage ride of the warm winter. Although the trail ride was shortened to stay on the lake, some 426 antique and vintage riders made the circular circuit, many several times around!

Speaking of the trail ride, we encountered three Moto Ski machines having fun and visited them when they stopped for a rest on the ice. Here it was three gentlemen from Boston, Massachusetts. One remarked that this fun on Lake Waconia was another check off on his “bucket list”.

Another example of a long distance visitor was a real friendly guy who journeyed from Newfoundland, Canada. He explained that he lived farther east than any other state or province on the North American continent. This Canadian may well have garnered the long distance award!

There were vintage and antique machines of all makes and colors. Waconia is well known by those who want to see the rarest and ‘odd-ball’ brands – all having fun in the cold crisp air.

Big smiles were seen on all the racers. Whether it was straight line ice drag racers on Saturday or oval racers on Sunday, these guys were happy to be racing.

With so many events canceled previous to Waconia, these racers were tickled to be able to try their latest clutching combination and share some real ice racing competition.

Likewise at the swap meet. There were more sellers than ever, simply because for most this was their first opportunity to sell their wares. One vendor proudly reported greater sales than any other year at Waconia.

The LOUD snowmobile contest was enhanced this year. The contest was broken into two categories – Megaphone and tuned exhaust. Winners received special trophies.

This year Chaparral was the featured snowmobile. The Ballroom display included many factory racers, prototypes that were never put into production and a 1968 SnowBirdie, the precurser to the Chaparral brand name.

On Saturday night, a charity auction was held for a gorgeous 1972 Firebird with 650 Hirth engine. The restored sled sold for $5,400 (a record) donated to the Make-a-Wish Foundation.