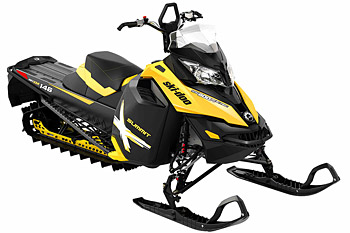 Don’t worry, there’s no cross-technology between the two names and, in fact, tMotion is targeted 100-percent at the mountain crowd.

What’s behind it? It’s a pretty revolutionary idea, really. Here goes: The idea is to allow the skidframe to have side-to-side lateral movement, as well as cycling up-and down.

Sounds weird but by allowing the skid to tilt laterally 2-degrees in either direction, the rider gets much quicker response when feeding in direction changes during side-hilling or cross-hilling maneuvers.

It’s especially nimble when performing powder hooks or when trying to initiate a direction change against the grade.

There’s a ball joint at the fulcrum of the rear arm and drop link, and the front arm is actually split into two separate pieces. Cool!

Besides t-Motion, the new REV-XM gets the latest 2013 XS-style bodywork and the additional bonus of better rider movement around the footwell area.

Now, the rider’s feet are further forward when standing with both feet on one running board for better leverage.

New 16-wide tracks have been developed with shorter reinforcing rods (only 12-inches long) running laterally so the outside 2-inches of the track flexes more.

Once again, this aids in maneuverability when turning uphill against the grade and further enhances the tMotion concept.

Because XM Summits are based on the new XS design, you’ll be getting the nifty heated storage compartment up top, the new LED taillight, better seat storage and a cool new “hinged” snowflap.

The new tMotion skidframe will be available on all early order Summit X models and 800 E-TEC equipped Summit SP models.

600 E-TEC SPs and all Summit Sport series will use the more conventional but upgraded for 2013, SC-5M2 16-inch wide skidframe.

Better check out what your dealer has for you!