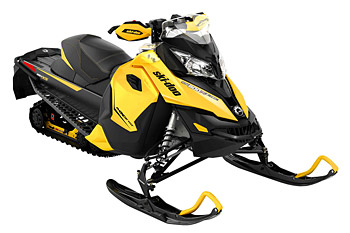 For 2013, Ski-Doo has extended its “X” platform nomenclature with a new series called “REV-XS”.

The new body design addresses several issues the XP lacked such as improved wind protection, easier ergonomic movement fore and aft and left and right for the driver and limited onboard storage capability.

From the driver’s seat there’s a heightened impression of quality because of more use of high gloss panel inserts.

There’s a new headlight design and the sled’s nose has been reshaped and some body air vents are hidden under individual layers of the panels where they overlap. The overall look is cleaner and fresher but undoubtedly, Ski-Doo.

Get this: There’s now a heated “glove box” storage compartment above the gauges between the windshield, heated by ambient heat circulated from the engine compartment.

Other XS features are an LED taillight, a new snow flap and the running boards have a much stiffer extruded aluminum edge than before. There are no front end geometry or suspension changes compared to the former XP.

We’re a bit disappointed there are no upgrades in power for any of these engines, especially the rising-in-popularity 130-hp 4-TEC triple.

The 2013 Renegade gets Ski-Doo’s rising rate rMotion suspension as does nearly every MX-Z model with the exception of baseline Sport MX-Zs and Renegades.

Spring Early Order programs guarantee depositors will get the new X-Series XS platform with shock upgrades and those who early-order select TNT models will get the XS bodywork and rMotion. The racer-based X-RS will still use XP bodywork in 2013.

4-TEC powered MX-Z and Renegade models will continue in 2013 with the original XR bodywork but rMotion is pretty much available with any of the big-inch 4-stroke MX-Zs and 137-inch Rennies.

More to follow about Ski-Doo’s attack on the Mountain segment with an all-new “XM” equipped with “t-Motion” suspension!

Staff Report
Previous articleHow To Adjust The Rear Suspension On An Adventure
Next article2013 SKI-DOO: What the Heck Is t-Motion?