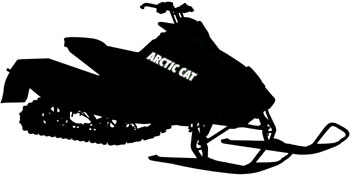 The Weapon is Waiting to be Unleashed

The 2006-07 season is over but Team Arctic’s Engineering and Race Departments are prepared to launch a new battle iron assault for 2007-08!

Last year’s attack found Arctic Cat drivers finishing on top. Cat riders campaigning in the Pro classes combined to collect more podiums than any Team Arctic squad in years, and the group earned a slew of post-season awards too.

But that success was hardly limited to the Pro ranks – several Semi-Pro riders ruled their division and Cat was also well-represented in the Junior, Sport and Women’s classes.

The all-new 2008 Sno Pro is ready to make it’s rider a new-age hero. The entirely-new 2008 Sno Pro with an all-new featherweight chassis is powered by a potent 600cc engine built and designed to race on 92 octane fuel, while the overall 2” shorter spindle to rear axle length, combined with the 15” wide track puts the power to the ground in a hurry.

Arctic Cat is not resting lightly on its performance heritage, we’re out to crush all competition with an entirely-new weapon.