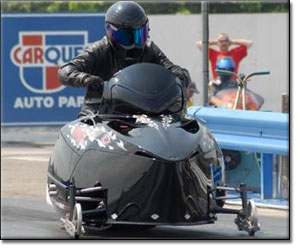 In any season, on any surface, Polaris Winning Performance puts Polaris racers into the winner’s circle.

Polaris racer Jeff Cullen proved that on July 15 when he won the “Power Adder King of the Tar” title for the third straight year in the National Pro Sled Shootout.

The sled’s nitrous oxide-equipped race engine produces approximately 400 hp, yet in the Pro-Shoot Out final, Cullen and his Polaris race sled beat a 450-hp Arctic Cat with nitrous and a turbo Charger.

The Pro Sled Shootout was one of the largest snowmobile asphalt drag events in the country; attracting the sport’s largest entry list of the season.

Team sponsor/owner David Abbott of F.M. Abbott Power Equipment, a Polaris dealership in East Waterboro, Maine, said Cullen’s sled is capable of better times and faster speeds on dragstrips with surfaces better than that of the Cicero track.

“At national events on good tracks, that sled will run under 8.20 all the time,” Abbott said. On the Cicero strip, he said, “the [sled’s] track was spinning the whole way down the track. That sled runs 8 and teens and 166 on a good track.”

Cullen’s winning sled is built on a Polaris EDGE chassis that has been slightly modified and strengthened, according to Phil Stanley of PCS Performance, who helped build and tune the sled.

Other members of the team behind the winning entry included David Abbott and his wife Judy, mechanic Steve Stanley and Phil Stanley’s wife Kristin, who races a Polaris PRO X 1000 in the National Speed Association’s (NSA) Pro Stock competition.

The Power Adder class is an open motor class, with virtually no restrictions on the engine mods and additives allowed.

Major upcoming events on the NSA schedule include an August 18th raceat Maryland Int’l. Raceway in Mechanicsville, Maryland, and September 8th with racing at New England Dragway in Epping, N.H.

Supertrax Onlinehttps://www.supertraxmag.com
Check back frequently for new content and follow us on social media!
Previous articleWhich OEM Holds Top Sales Position?
Next articleVISIT SUPERTRAX CREW AT SHOWS ACROSS US AND CANADA