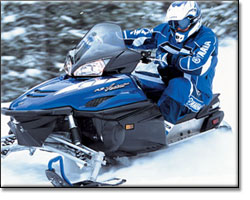 Yamaha has been singing the praises of the RS Vector’s new Genesis 120 4-Stroke power-plant since the snowmobile’s introduction. But that’s to be expected, right? Now, though, unbiased and independent sources are adding their voices to the loud chorus of those cheering the RS Vector’s performance.

“The RS Vector’s broad power-band sets a new industry standard,” says Jim Czekala, editor of the online dyno test information Web site www.DynoTechResearch.com. Since 1998, Dyno Tech has put snowmobiles and related products on the dyno to discover the truth behind the power promises of manufacturers.

According to Dyno Tech Research the RS Vector cranked out 118.8 hp. Czekala says, “The RS Vector maintains 98 percent of its maximum horsepower over an incredible range of 1300 RPM.”

The RS Vector’s Genesis 120 4-Stroke engine creates more torque and horsepower in the low to midrange power category than even the mighty RX-1. In addition, the RS Vector has a horsepower band that is higher and broader than its closest 120hp class competitor.

Supertrax Onlinehttps://new.supertraxmag.com
Check back frequently for new content and follow us on social media!
Previous articleSomething Very New From Yamaha
Next articleSaving Yellowstone for The Children