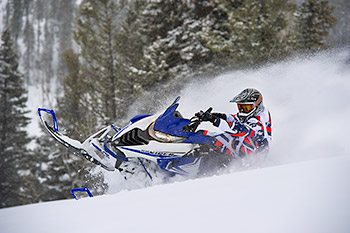 It’s been over a decade since Yamaha promised it was getting out of the 2-stroke snowmobile business and by MY 2004 nearly every sled it built featured 4-stroke power.

It’s been an unprecedented undertaking considering the higher manufacturing costs and the weight penalty 4-strokes carry – particularly in an era when snowmobile weight has been front and center with consumers.

This year, Yamaha has opened doors into markets it has not held much court in for the last ten years. Case in point: The company is offering a pretty cool mountain Viper this year with 153 or 162-inch track choices.

The 162-incher is the one we think has the potential to convert a few 4-stroke-doubting mountaineers over to Yamaha turf and we’re anxious to see if it will be a sell-out success for the company.

All indications are it’s doing well and just as the marketing team felt, there is in fact, a group of altitude riders who find the prospect of a vertical 4-stroke appealing.

It doesn’t hurt that Yamaha has made a really good turbocharger add-on kit available and hasn’t reneged on its OEM warranty if you do the upgrade.

Here’s where our speculation-meter starts to warm up. What if the new Mountain Viper does really well and Yamaha sees potential for bigger things in the vertical biz?

You probably already know Yamaha owns patented super-clean direct injection 2-stroke technology and has offered it in its marine division.

It’s no secret the cost to get a sophisticated 2-stroke mill EPA approved, tooled and down the assembly lines is much less involved and expensive than doing the same with a high performing 4-stroke.

We think, despite the fact it runs counter to what identity Yamaha has gained with 4-strokes, there’s real potential for this to happen.

Building a Yamaha-reliable DI 2-stroke would put the company right in the wheelhouse of its competitors and it would mean its future high performance sleds could compete head-to-head for weight, handling and floatation in markets it has vacated because of its 4-stroke-only mantra.

Hey, never forget this: To a snowmobile manufacturer, it’s all about making money. The way for Yamaha to make money is to compete in ALL markets.

Kent Lester
Kent Lester is Co-Publisher of SUPERTRAX Magazine and a regular contributor to this website.
Previous articleOFSC Offers Savings on 2015 Trail Permits
Next articleVintage Snowmobiling At Its Finest