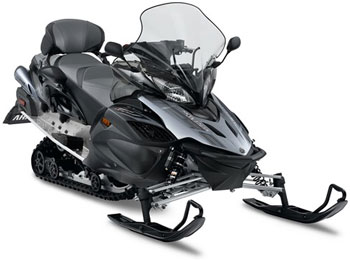 Yamaha’s choice to use its Apex-style, rider-forward chassis in its premium 2-upper was a brilliant idea.

With a torquey, new 1049cc mill and the addition of EFI, this is a tough tourer to ignore. We’ve had a few complaints, though and we’ll cover them here.

One niggling gripe is the V-GT’s handwarmer control. This is Yamaha’s one-handed job with a cycling read-out on the instrument pod that moves between grips and bar heaters every time you release and engage the switch.

It also moves to the hottest setting and back down to the lowest position automatically. This is especially annoying when you’re trying to make adjustments on the fly.

We prefer heater switches that don’t require you to take your eyes off the trail to focus on what the gauges are telling you.

A bigger issue has been the GT’s skidframe calibration. Apparently, there were changes between the prototype sleds and the production ones. This version is way oversprung and, yes, resists bottoming with two riders aboard, but is too harsh, even at its softest spring and dampening settings, for one rider.

On the plus side, this sled’s seat is ultra-comfortable and the GT is loaded with a dazzling amenity list.

The acres-large windshield protects you on the coldest days but, at higher speeds, creates a backdraft that feels like a giant pair of hands gently pushing you forward.

Our press sled has been bulletproof reliable and is still a top choice on cold days for long, long rides.

Supertrax Onlinehttps://new.supertraxmag.com
Check back frequently for new content and follow us on social media!
Previous articleAbitibi-Temiscamingue …With Open Arms!
Next articleInsane Dyno Numbers On ’09 Cats