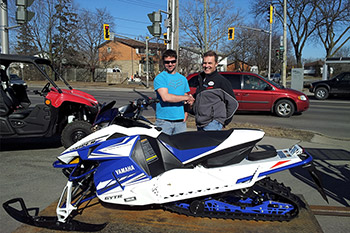 The contest was held in conjunction with Supertrax Magazine and supertraxmag.com, that ran from October 2014 – January 2015.

He expressed his surprise and elation, “I was having a real bad day when I got the call, and it instantly went from bad to amazing in one sentence! What an incredible feeling. I’ve owned Yamaha products in the past but currently didn’t have any snowmobile. I am so excited to get back into the sport next winter with a brand new Viper and a whole lot of extra power with the MPI Turbo Kit!”

Goodlet entered the contest online after seeing the promotion in Supertrax. “I’ll tell you this, I am so thankful I took the time to enter it. I just want to thank Yamaha and Supertrax for putting something like this together!”

Yamaha recently launched their 2016 snowmobiles and is currently in the middle of their Spring Power Surge early deposit program with a host of exciting new Limited Edition models.