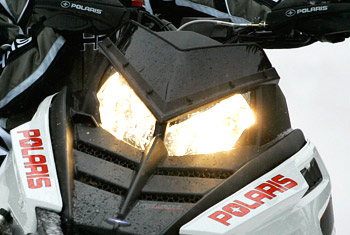 It’s become so annoying to us we’re going to start naming names about the silly low windshields on some sleds.

Really, what’s with the windshield on this year’s RUSH Pro-R sleds? C’mon, we’ve got helmet visors bigger than that. Sit on this sled on a below zero day at 70 per and you are going to get frostbite.

This one is so small it doesn’t even deflect the wind, it just sits there with nothing to do. The marketing guy that dreamed this one up should be forced to ride it all year in Thompson, Manitoba.

Some of the Yamaha Nytro windshields are pretty small, too. I think Yamaha at least made an attempt to reroute some air this year by adding a bit more surface area and a few crimps in the Lucite. Still sucks.

Kudos to Ski-Doo this year for making its base MX-Z windshield one that is functional and reasonably warm. It’s a huge improvement and saves you some moolah because you don’t have to buy another one after you’ve gotten out of the hospital after your bout with hypothermia.

If you want to know how a windshield should work, check out the Twin Spar Cats. The base models’ windshields are great on these, but even Cat is tempted to use ridiculously low windshields on, guess what.. its fastest Turbo sleds. Yeah, I need that: A 177-horsepower sled with no functional windshield.