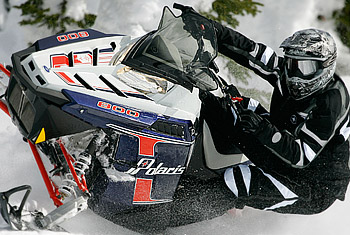 It doesn’t take a wizard to notice Polaris has not been putting a high priority on its 4-stroke engine program the last two years.

The super-reliable Polaris-Weber 750 with a turbocharger tacked on produces consistent power in the 140 range and is a very pleasant engine to ply on trails – especially in it’s 2-up Touring iteration.

When it comes to raw sizzle, though, Polaris seems to be headed in the direction of big-inch 2-strokes as evidenced by its new 2-injector 800 which, quite frankly, we’ve found to be a rocket!

This mill is very clean and produces a lot less warm-up smoke than some 2-stroke competitors because of its on-demand oil pump that only feeds oil at off-idle RPM.

It’s all good and this is a wonderful performance engine but we have to ask the nagging question: “Is this engine a stop-gap or is it clean enough to keep the EPA happy for several years?”

Our guess is that Polaris will not be developing any more 4-strokes in the near future but right now is working on a direct-injection 2-stroke program that will take the company through to the end of the next decade.

Don’t think for a moment Polaris hasn’t been working on DI engines for at least the last four years.

There is very good technology out there already in production that does not infringe on Ski-Doo’s E-TEC design and we think Polaris either has it or is working on licensing it from someone else (and it ain’t Ski-Doo).