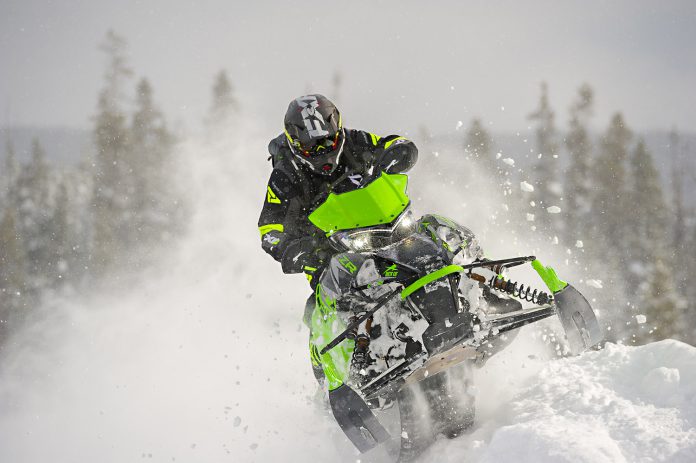 If that question hasn’t been verbalized in the press, it’s certainly on the lips of many performance enthusiasts this year.

To re-state, the question being asked is: Will the slot-injected 800 Cat get its ticket punched by the new Polaris Patriot 850 and Ski-Doo’s 850 E-TEC?

Although the math says 800ccs should never be as fast as 850, we fully expect the DSI Cat’s actual performance to be fairly close. Why?

The fact is, no snowmobile engine delivers all of its power to the snow and extreme high performance production engines tend to hold back some of their potential for reliability reasons – especially early-on in product introductions to the consumer market.

Keep this in mind, too: Cat has known about the 850 wave for a while now and the key to matching on-the-snow performance will have everything to do with clutching, friction and perhaps, intentionally extending the 800’s power potential a bit further than last year. Last season, this 800 was making a claimed 162-hp and that’s mighty close to what the 850s are postulating.

The truth is, Cat only needs to make one 800cc ZR model that can run with the 850s. Think we’re wrong? Look at Yamaha’s new SideWinder SRX.

In the power department this sled is virtually the same as other SideWinders, but the SRX uses a low friction, one-inch deep track to get its top speed up into the twilight zone.

Sure, traction is an issue but, wound out on a hard-packed lake, that track enables the SRX to pull as much as two or three more mph up top. Technically faster? Yup. Making more horsepower? Nope.

When it comes right down to it, bragging rights are always about who gets to the end of the lake first, not who’s making more power in the garage.

Word is, Cat is working on a bigger 800-based engine for the future, but this year, in MY2019, Cat knows exactly what it has to work with – and work against. We’d put money on surprising performance from any 800 Cat this year.