WILL BUYERS RESPOND TO THE RS VECTOR AND THE APEX? 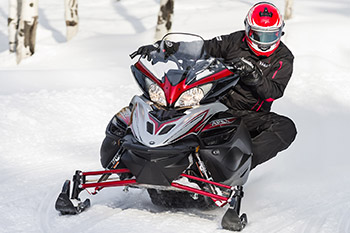 We’ve been wondering how the showroom response will be when people have to walk by the extensive Viper line-up before choosing to buy a new Vector or Apex this year.

Yamaha made changes to both these sleds rear suspensions, dropping weight and actually improving the way they perform.

We’ve noticed a considerable difference in the way these sleds turn with both the 129 and especially the 146-inch version of their new SingleShot skidframe.

Frankly, the Apex with a 146-inch SingleShot is a surprisingly good handling, great riding sled that goes far beyond what the 144-inch former versions performed like.

You could say the same for the Vector. It has the same suspension changes plus a new version of the 1049cc triple under its hood this year. Although we don’t see much difference in performance, the engine has a beefed up crankshaft, different rods and new pistons.

Its most noticeable change is its drive-by-wire throttle that offers three driving modes and delivers very smooth and linear throttle tip-in – something we had absolutely no complaints with in its original form.

Are these changes significant enough to pull customers away from Vipers? We think there’s still a strong element of Yamaha owners who simply wouldn’t buy a Viper because it is built in Thief River Fall, Minnesota. These Yamaha hardcores only want a real Yamaha. It’s here the Vector will satisfy.

We think the Apex will have less trouble capturing buyers simply because it’s the only hyper-powered sled Yamaha offers. The changes in weight and skidframe tech will go a long way toward keeping those types of buyers in the Yama-fold.

Frankly, we’re anxious to see where all this is going. We don’t know how many more years sleds like the Apex and Vector will be relevant in light of the success Yamaha is seeing with the Viper.

It’s likely going to take another year or two before the blanks start to fill in with where Yamaha’s next generation of sleds are going.

Kent Lester
Kent Lester is Co-Publisher of SUPERTRAX Magazine and a regular contributor to this website.
Previous articleANOTHER PRIZE PACKAGE AWARDED!
Next articleCompetition Grabs Attention From Across North America