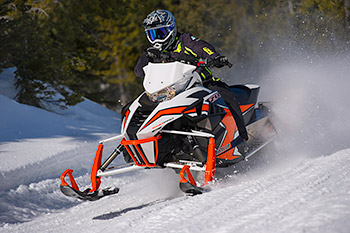 Arctic Cat’s legendary Roger Skime once made the statement: “As soon as we build a 4-stroke that weighs the same and performs the same (as a 2-stroke), it will outsell our 2-strokes”.

If you’ve spent any time on the seat of one of Cat’s 1049cc ProCross triples, you know the company has come mighty close to matching that statement.

It seems the market is liking the long-term reliability and ease of maintenance these 4-strokes deliver and once they ride them, are discovering just how close they are in power to their hyper-2-strokes.

They also like the fact the 4-strokes are worth considerably bigger dollars at resale time after four or five years and haven’t gone through one or more engine rebuilds during that period.

Seriously though, what about the weight thing? It’s undeniable 4-strokes on average weigh between 45 to 65 lbs. more than a comparable 2-stroke. It’s tough to ignore that extra weight, especially when it’s placed fairly far-forward in a snowmobile chassis.

What has happened the last few years however, is the chassis designers have been able to build 4-strokes that don’t feel heavier when they’re ridden.

Ski-Doo’s 900 ACE is a great example of this and Yamaha and Cat’s sleds with the 1049 just flat-out do not feel heavy when you ride them!

Truth is, they feel like 2-strokes. In the 120 to 130-horsepower range, the overall handling, ride and engine performance of these sleds is mighty close to what you get with a 2-stroke.

Here’s our opinion (definitely not shared by everyone on the Supertrax roster): We think the 4-stroke market is poised to make big gains on 2-strokes over the next two or three years. Why? The market is running out of reasons not to buy them.

Tell us if you agree or disagree.