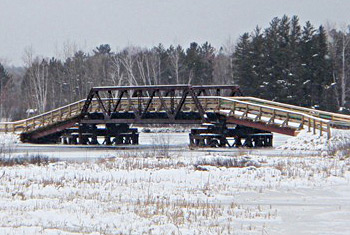 Ontario’s famous RAP Tour is an acronym for “Ride Around Algonquin Park”. It follows one of Ontario’s Trans-Provincial snowmobile trails, TOP B, along the southern edge of the huge provincial park between the towns of Whitney and Barry’s Bay.

Last year, a major abandoned railway bridge across the roaring Madawaska River was closed because of deterioration in its wooden pilings.

The old bridge was a big one, spanning nearly 400 feet across and, since it was originally built in 1942, it had carried railway traffic until 1983 when the line was converted to other uses – snowmobile and ATV traffic especially.

Here’s what’s most important: The bridge was integral to a snowmobile route that linked Haliburton County trails to the Ottawa Valley.

Initial cost estimates to replace it were in the $900,000.00 range. Just to repair it to safe standards was going to cost at least $700,000.00. After much work by the Opeongo Snowmobile Club and OFSC District 6, government permission was obtained to replace the east and west spans of the bridge, leaving the original, repaired steel center portion in place.

In all, the bridge rebuild will end up costing about $400,000.00, a big savings thanks to about a dozen snowmobile clubs and powersport recreation associations as well as many private donors.

It was great to see how both snowmobile and ATV groups rolled up their sleeves and got behind the project. One such ATV club was the North Hastings ATV Club, located a considerable distance south of the bridge.

Knowing how an open Madawaska route would benefit its membership, last summer the club made a very generous donation of $5,000.00 to the bridge project.

This by no means was the only donation made but it graphically shows how the generosity and cooperation of all user groups can make a big project like this happen.

Certainly, the investment will yield a return for the club but it was a strictly voluntary effort to support a uniform trail network across the province.

We send out a big “thank-you” to the North Hastings ATV Club and all the clubs and associations who got behind this project.

Other groups besides North Hastings that donated dollars and services are: