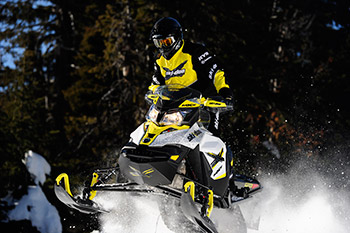 The Supertrax bench racing team frequently get into hot-headed arguments about the virtues of different snowmobiles and snowmobile brands.

Although there’s rarely full agreement, sometimes there is the occasional nod of the head and reluctant approval given.

One point of discussion is about who will be the big winner (defined as making the biggest market share gain) in the next 12 months. It’s important to note, you can’t define a winner without reflecting on who is the most vulnerable and will relinquish sales to the net gainers. Lets check out the facts.

Ski-Doo has at least 40-percent of the market and arguably the hardest-core group of dedicated followers presently. Their dominance means the other three OEMs are dividing up less than 60-percent.

Keep in mind, gains in market share rates do not come in double digit amounts, more like a fraction of a percentage point at a time and there’s also the possibility the overall market will grow, too.

Yamaha now offers nearly double the number of sleds it did three years ago. Based on the sheer availability of more units in more segments, it should gain a few pops in market share.

Arctic Cat has also increased its model mix and is performing very aggressively against market leader Ski-Doo in both 4-stroke and 2-stroke categories. We see potential for a gain.

Polaris has dominated the mountain market and is gaining credibility with the new AXYS in both the vertical and trail markets. The company has also increased its presence in the utility realm with a wide selection of Indy. We’re thinking increase here, too.

If there are increases from two or three of the snowmobile makers, it means one or two will either stay the same or lose some points – all provided the overall market remains static. Hmm.

The four manufacturers are producing great stuff in a multitude of categories and it’s not like you’re going to get something sub-par if you change brands.

We’ll report on the numbers as more information comes through – and the weather cooperates to give us all a great riding season and the OEMs a great selling season.