WHO IS KING OF THE MOUNTAINS? 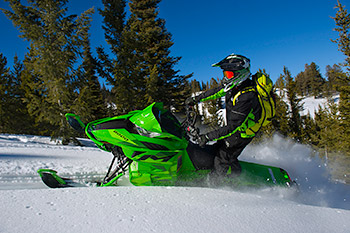 Our bench racing team spends a lot of time thinking about what’s best.

As a matter of fact, our December 2015 issue of Supertrax will be focusing on just that: What is the best sled in each of eight different categories.

Polaris has come with an AXYS-basd RMK line-up and these sleds are very sophisticated, using carbon fiber and other weight saving techniques to reduce mass and add chassis stiffness. The addition of the super-powerful Liberty 800HO powerplant introduced in the trail-targeted AXYS line-up last year means two things are working to the buyer’s benefit: Less weight and more power.

It’s pretty difficult not to give kudos to Polaris when the company took a sled that was arguably at the top of its class and made it so much better….Unless you consider Arctic Cat.

The front end and skidframe tweaks made to the new M-Series Cats combined with all-new TEAM Industries clutching make major changes to the way this snowmobile handles in the deep stuff. Our test riders tell us there’s a measurable improvement in these sleds and they are truly worthy of consideration.

Then there’s Ski-Doo. The T3 concept is really working and the fact you can buy super-long tracks like a 163 ad a 174 with SK’s unique, tilting tMotion setup adds a lot of appeal.

One of the biggest factors is that Ski-Doo has made tMotion available on several more models this year.

Ask Yamaha and they will tell you they’re dead serous about the mountain market. Sure, some would rule them out simply because they are 4-strokes. The fact is, the Viper MTX series are surprisingly capable – maybe not to the extreme level of the 2-strokes… yet, but fully able to perform at levels many would have thought impossible a few years ago.

So there you have it. If you were us, what would you choose?