WHICH ULTRA-PERFORMER IS BEST IN 2018? 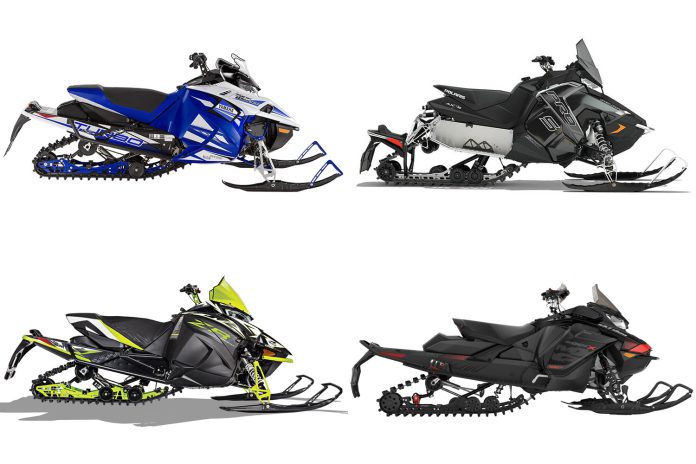 There are actually five hypersleds to choose from this year and it’s a tough decision to decide which one matches the best combo of value, rideability and flat-out power dominance.

When it comes to pure power, it’s impossible to deny the two turbocharged 4-strokes, Yamaha’s SideWinder and Cat’s 9000-Series turbos, dominate the category. Simply stated, 180 to 200-hp (whichever “experts” you believe) flat-out trumps any 800 or 850 at the end of the lake.

However, rideability and handling come into question when you compare the heavier 4-strokes to the way-lighter 2-strokes. Day-in, day-out riding on all types of terrain will soon tell you the big turbos, although wickedly fast, are a handful.

The other thing is price. The two turbos are expensive. They’re so expensive, they may be right at the borderline cost level where most high performance buyers simply walk past them. Depending on the turbo model you’re choosing and the 800 you’re comparing it to, the difference can be 4 to 5,000 dollars. Lots of moolah – but maybe justifiably, the price of buying speed!

The two 800s, Cats new DSI 800 and the Polaris Cleanfire, are formidable performers and offer all the benefits of lightness and power-to-weight that makes them genuine powerhouses.

Pricing and model selection are both reasonable and when it comes to acceleration and top speed, although not as fast up top as the turbos, both of these sleds are still very, very quick accelerating and carry considerable top speed. Same goes with the 850 E-TEC. Statistically it may be slightly faster than the 800s but quicker mid-range acceleration may be more due to Ski-Doo’s pDrive primary clutch than with the 850’s raw power.

Here’s the bottom line: Line all five up on the same day, in the same snow, same temperature, same track, no studs and at the end of one mile, the turbos will be ahead. Out of the hole and for the first 500 feet, the 800-850s may be in the lead due to either better hook-up (the turbos will be spinning their tracks for the whole mile) or more efficient clutching.

After 500 feet, the 850 will pull a sled-length or two over the 800s (both of which will be about dead-even). At the end of the mile, the turbos will be far ahead as they continue to get more bite and their raw horsepower shifts up the clutches quicker, but their actual top speed may not exceed the top end speed of either the 800s or the 850 by more than a few mph.

That last statement is the reason why, if you’re having a friendly drag race out on the lake between a turbo and an 800-850, you may want to roll on the throttles when you’re at about 60-mph instead of from a dead start.