What If Yamaha Built a 2-stroke Again? 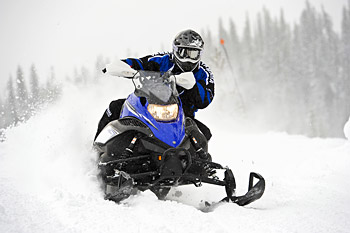 We’ve been postulating a lot of banter about Yamaha’s unique 2-stroke Direct Injection system the company has been using on its outboard motors for several years.

It’s called HPDI for High Pressure Direct Injection and is a very proven, bulletproof DI design that burns extremely clean, doesn’t smoke and gets gas mileage on a par or close to BRP’s E-TEC system.

It’s technology that hasn’t been used on a production snowmobile yet but is nevertheless very valid and attractive to those other sled-makers who build 2-strokes and would like to get a piece of Ski-Doo.

The question is: Why would Yamaha give up this technology to another OEM when it has invested jillions in perfecting it for itself?

We had thrown the theory out there that maybe a new Arctic Cat 600 2-stroke (if there really is one) could have Yamaha’s HPDI system on it. Although this is a bit of a stretch, we think it makes more sense Yamaha would come up with its own HPDI 2-stroke – probably an 800 or larger.

Why? It would get Yamaha into the burgeoning mountain market in a hurry and end all the complaining about weight in other categories.

Certainly, there’s a growing market for 4-strokes out there, but as both Arctic Cat and Ski-Doo have proven, manufacturers don’t necessarily have to marry themselves to one type of engine.

These companies have successfully targeted 4-stroke and 2-stroke customers and built very strong followings in both segments.

Yamaha has a history of building strong, powerful 2-strokes and although it has established its reputation as a 4-stroke company, it doesn’t mean it couldn’t reverse the trend and jump back into the 2-stroke market.

We could see it happening.