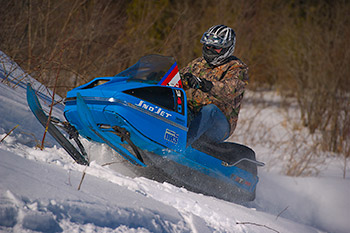 The vintage sled phenomenon has been growing like wildfire the last few years.

Mining the internet for leaf spring sleds has become a pastime for more and more enthusiasts of all ages.

You’d think it would be the “old guys,” those who actually owned these sleds back in the sixties and seventies who would be the most avid in their search for good vintage iron. It is true; many snowmobilers who owned those classics back in the day would love to return to their roots and find a “perfect” example of what they rode decades ago just to revisit the thrill of snowmobiling like they experienced at first.

What’s really interesting is the number of younger people – those in their twenties, thirties and early forties – who are out there looking, too. Remember, even a person in their forties was just a kid when the last “leafers” rolled off the assembly lines, so it’s unlikely they actually owned a new one back then.

Maybe it’s because they inherited one from a parent or picked up a used one when they started snowmobiling – hard to tell. It’s curious, though, how many of these younger vintage buyers will confess they had never owned or even ridden a leaf spring sled but got into it because a friend had bought one and they just loved the idea of riding something so raw-boned and unique.

Our crew at Supertrax are a great example. Our garage has been infested with a herd of leafers the last couple of years – ancient TNTs, a Scorpion, a Snow Cruiser, several Sno-Jets, a Moto-Ski and most recently, a Yamaha ET-250.

Our younger team members are the ones doing the restoring and refurbing and, yes, the riding. Interestingly, these guys are learning more about snowmobile clutching, 2-stroke rebuilding and track and skid revitalizing than they ever learned from riding our up-to-date press fleet. It’s what they’re loving.

For over a decade the industry has been concerned about the average age of snowmobilers getting older and new, younger enthusiasts not growing commensurate with the ones leaving the sport because of old age.

It seems to us, the simplicity and accessibility of these old sleds is generating a whole crowd of young enthusiasts. It’s as simple as being able to pop open the hood and do your own tuning and maintenance yourself.

Maybe, in the big picture, we’re missing something.