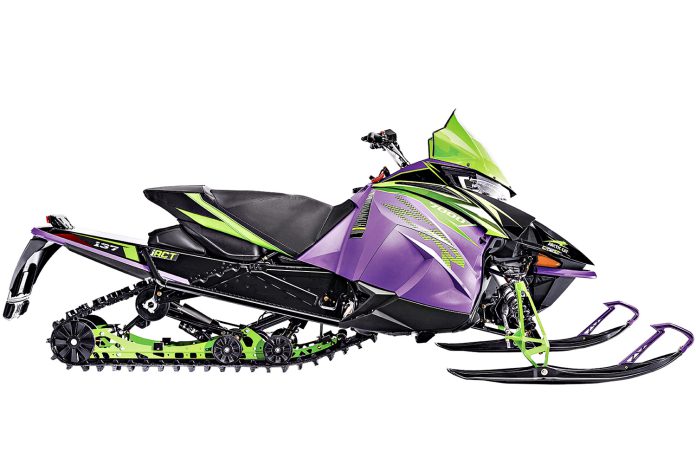 The exception was the 7000-series of 4-stroke sleds that retained their original plastic.

This year, the 7000 series gets the more modern plastic used on the 2-strokes and it constitutes the first major change to Cat’s 1049cc 4-stroke line in four years.

The upside to this change is the ease with which body panels can be removed and replaced. This was less of a problem with Cat’s 4-strokes than it was with its 2-strokes which require side panel access to fill the oil tank.

This was a pain in the neck and usually resulted in spilled oil and a sloppy mess every time you tried to add oil. The panel change fixed that problem and also added a more aero look to the sleds and a tighter fit at the seams.

As for the rest of the sled, it;s pretty much business as usual. Cat has continued with the same Yamaha triple (still no DBW throttle setup) and the same combo of TEAM clutches (roller secondary) that have worked extremely well with this awesome, bulletproof, and might we add, sweet-sounding engine.

iACT is operated from a new left handlebar control and has three settings for the rear track shock: Soft, Medium and Firm.

The rider just taps a button on the brand new left side switchgear cluster and a large readout on the electronic dash gauge indicates which setting (soft, medium, hard) the shocks have adjusted to. The on-the-fly damping changes happen instantly and are immediately noticeable.

iACT uses Fox’s gas shock QS3 technology and although we love the manual ease of adjustability of the compression damping on these 3-position shocks on any model, Cat’s QS iACT version takes suspension on-the-fly control to a new level.

There’s always the “is this option really worth the extra bucks” question and we will say without hesitation, iACT adds such an impressive dimension of comfort and confidence to the riding experience, you begin to wonder how you ever rode manual systems before.

You can run trails set on “Soft” and if you spy some rough trail ahead, just spool up the hand control to Medium a few breaths before you hit the roughage and Bob’s your uncle.

Likewise, ditch bangers can run with settings on Hard and then turn the controls over to another rider (wife) who may not require such an aggressive setting.

The best part is, you always know exactly where the suspension is set and can change it in an instant to your exact liking.