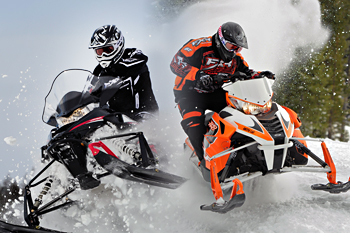 It’s been a year since Yamaha and Arctic Cat announced their manufacturing deal to blend Yamaha engines with Arctic Cat chassis platforms.

The Viper has been an incredible sales success for Yamaha and the Cat 7000 series is becoming one of the company’s most-loved sleds in only its first year.

Supertrax has had a very good snowmobiling season to come up with an appraisal of the two sleds.

Our riding time measures in the thousands of miles on them and we’ve got some strong feelings about both. Readers have been asking us: “Which one is the best?”

It’s not an easy answer because there is much to love about both and not much to hate. Here’s a breakdown on some of our impressions:

Both the Supertrax press Viper and the Cat 7000 have been extremely reliable this year but there’s a funny glitch in the computer that sometimes makes them hard to start when they’re warmed up.

Every once in a while, you have to close the kill switch, turn the ignition off, count to ten and then try again. They always start but it’s just one of those first-year things some owners have had to deal with.

This is probably the biggest difference between the two sleds and it really makes the sleds feel different when you ride them. Cat uses a very quick shifting roller secondary and its acceleration and backshift response is great.

Unfortunately, most 7000 Cats were delivered with too-light weights in the primary and had an over-rev situation exceeding the engine’s recommended 8,500 RPM (approximately) shift speed.

A bulletin was sent out warning owners to go easy and watch the tach because the engines could over-rev into the 91-9,300 range. Too bad, because the 7000 really works well despite the mix-up in production weights.

No such problem with the Viper. It maintains a safe RPM level without any baby-sitting and thus enjoys a better top speed advantage. Although the clutches are not as crisp in their shifting duties, they work well, but without the sense of Cat’s firm backshift.

There’s a noticeable lack of freewheeling with the Yamaha that shows itself when you get out of the throttle. Some riders really love this “engine-braking” feeling, others don’t.

Surprisingly, we’d call belt-wear a draw. Cat’s efforts to reduce belt heat appear to be working and we haven’t seen any more belt wear with the Cat clutches than with Yamaha’s. A nice surprise.

Yamaha went with a fairly aggressive single runner ski profile on the Viper and it produces more of a darting effect than the 7000 and steering effort is a bit higher.

On the other hand, the dual runner skis delivered on the Cat were pretty unresponsive in the early part of the season when the trails were more sparse or frozen down.

We switched to a single runner and got better steering response in those conditions but now that the snow is much deeper we’d like to switch back to get rid of the darting.

We think it’s because the whole ski bottom is contacting the snow all the time when deeper, softer conditions exist and the dual runners flat-out work better in that environment.

We’ll give you more feedback as space allows…soon.

Kent Lester
Kent Lester is Co-Publisher of SUPERTRAX Magazine and a regular contributor to this website.
Previous articleTEST RIDE: 2014 Ski-Doo Renegade 900 ACE
Next articleBrian Dick Wins the 2014 I-500