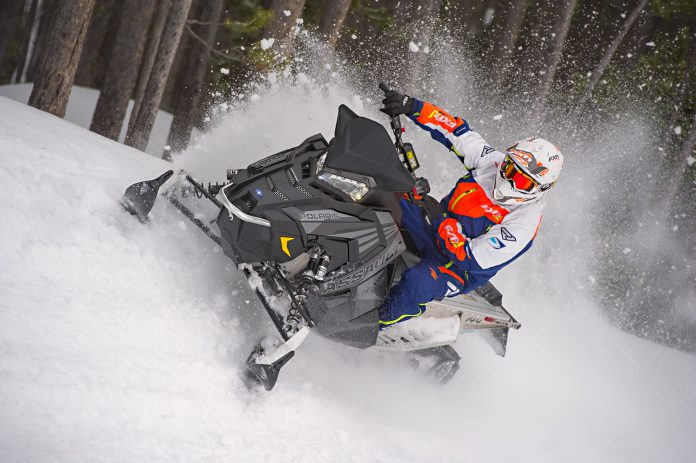 We’re not gonna mix words here. The original Pro Ride-based Switchback Assault has not been among our fave rides. It used a 144-inch uncoupled skid without torsion springs and gave its rider an unrepentantly stiff ride. Some said it rode like a dump truck in moguls and handled like an overloaded A class motorhome in the twisties. Okay, maybe a C Class motorhome. The problem was the chassis was too much off-trail and too little on-trail to be a real dual-purpose snowmobile.

For 2017 Polaris moved the Switchback Assault into the AXYS front clip and developed a brand new skid. The changes Polaris made amount to a completely new sled and we mean more than just parts and power. We mean a new response in terms of ride and handling.

The 800 HO is a complete re-think of the original Cleanfire 800. It pushes out 160-odd-ponies using 3-stage exhaust valves and a 2.5 pound lighter crank. The engine cases and all associated hardware have been rationalized and designed for both efficiency and lightness. Case in point: The 800 CFI actually weighs one pound less than the 600! There’s an electronic oil pump for vastly improved oil efficiency and standard equipment V-Force reeds are used.

Interestingly, the lightened crank trick has been emulated in Ski-Doo’s new Rotax 850. It’s obviously a solid idea that delivers enormously improved throttle response, spool-up and corner-to-corner thrust. Keep in mind, we suspect it was this Polaris engine that motivated Ski-Doo to do an 850 instead of another 800.

The Assault’s rear suspension desperately needed rethinking. The all-new skidframe is not an RMK cast-off or clone – it’s a new generation of skidframe utilizing an ultra long front torque arm, torsion springs and an uncoupled rear arm, referred to in Polaris marketing hype as the IGX skid.

The new front torque arm, dimensionally identical to that used on the Pro-XC external shock skids (RUSH), produces over 40-percent more travel. This is not inconsequential. This travel improvement, in concert with a non-coupled rear drop link produces two important results: First, mogul absorption is remarkable, and we don’t mean when compared to the old torsion-less skid. We mean when compared to Pro-XC! Only under the worst conditions we could find was anyone able to conclusively say the Pro-XC was better than the IGX.

The second benefit of the uncoupled rear arm is deep snow mobility. The new Switchback climbs on top of untramped snow easily thanks to the increased front arm movement and the uncoupled rear drop link. Sounds like a win-win to us, but you’ll be the final judge.

You have the choice of the 1.35 Cobra or a Series 4, 2.0-inch deep lugger for traction. The 1.35 is the best choice if you’re riding on-trail more than off. The 2.0 wins if you’re riding mostly off-trail. The 2.0 is rumbly on hard pack as a result of a stiffer durometer rubber while the 1.35 is mostly transparent, not generating annoying vibes or rumble but still capable on and off-trail.

We have to commend Polaris engineers on this re-invention of the Switchback Assault. There’s a lot here that’s new to digest, all in one year. As always, we’d love to see a better stock windshield – this one’s pretty chilly. We also think a clip-on passenger seat would be a superb accessory for those who justify their purchases to a significant other.