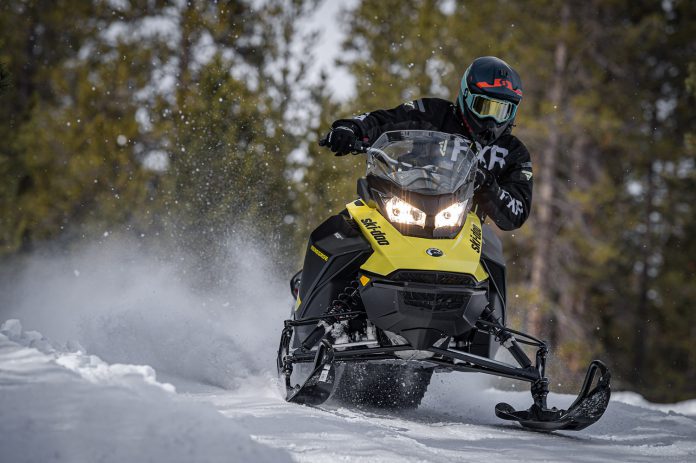 The snowmobile biz needs a Spark! Hmm, what’s a “Spark” supposed to be anyway?

Well, if you’ve been paying attention to the personal watercraft biz the last few years you’ll know the Sea-Doo Spark is a PWC that has literally turned that industry on its ear and changed the fortunes of Sea-Doo immensely.

The formula was simple: Build a cheaper (but durable) watercraft with decent performance (but not as much as the top line models) and has the image and styling of a much more expensive watercraft, then dress it up so it has arresting visual results when you look at it in the showroom.

Sea-Doo did just that and the Spark has become one of the top selling PWCs of all time. Customers love them and more importantly, it has returned buyers to the kind of enthusiasm for personal watercraft that existed in the early 1990s.

If you can recall those days, you’ll remember how almost every cottage and lake home had at least one Sea-Doo tied up at its dock. Those early Sea-Doos were so cheap and so fun, owners of one easily were persuaded to get two – and what the heck, even three or four.

This is heady stuff if you happen to be the marketing or design guru who thought up the whole Spark idea. You’ve turned the fortunes of a waning industry by creating something everybody wants and renewed the enthusiasm of a decades-old business. A tall order – but amazingly, mission accomplished!

Does the snowmobile industry need a development like this? You bet it could use this kind of metamorphosis of enthusiasm!

In fact, the sno-mo-industry has been dabbling right in the core of this kind of thinking for a few years itself. Sleds like the EVO, the BLAST, the Venom and especially the Sport Series Ski-Doo sleds have come mighty close. Some are closer than others. Case in point, the Ski-Doo 600 EFI Sport models.

Before we look at Ski-Doo’s effort with the Sport, we need to look at the other brands’ attempts at building a true “Spark”. At this point I need to assert there is nothing wrong with the BLAST, Venom or EVO. Each of these sleds has been enormously successful in its market. In fact, some have gone as far as creating a completely new market where both new riders and young riders who grew up in snowmobiling families can find what they want. Have they had the same game-changing effect the Sea-doo Spark has had? Not quite.

If you look at the MX-Z, Renegade and Backcountry Sport series, you’re getting much warmer. We’re not sure if you could call any of the SK Sports an unqualified success – but they sure aren’t failing! Ski-Doo feels like they’re a huge success but it’s hard to gauge success or failure in a market where everything sells out to the bare walls because of COVID.

Do the MX-Z and Renegade Sports meet the criteria of an ideal Spark snowmobile? In most ways, yes. In some ways, no. Is Ski-Doo close? You bet!

The biggest problem the Sport has is its lack of sexiness. Drab grays and blacks with no chrome or flare makes for a librarian persona that just doesn’t match the Spark’s cool, bright colors and hot dog graphics. Yes, I can see someone getting a bit excited about buying one, but only if everything else is already gone from the showroom. These excellent sleds need a serious injection of hoo-hah – head-turning, conversation interrupting, flat-out bug-your-eyes-out sexiness. Yes, it can be done with paint and graphics.

The Sport also needs a suspension upgrade; particularly, the skidframe. After a year on one we were very positive on the G4 chassis, handling, clutching and the 600EFI engine and especially its pricing – but this sled needs the addition of the last generation coupled SC4 skid that used to grace every MX-Z and Renegade. Do this and jazz the paint and graphics a bit (the way Ski-Doo is so good at doing) and voila! The Spark snowmobile.

Ski-Doo has had huge success in its watercraft division with the Spark and it won’t take much to model a snowmobile after it. Maybe the accountants won a boardroom battle or maybe the marketing team just thought snowmobilers wouldn’t be influenced by the obvious. The good news is, this can be fixed and the fix won’t break the bank, either.

As for the other OEMs, when Ski-Doo reaches its potential with the Sport series when the market naturalizes and they’re selling like lemonade in Palm Beach, the other three will be right there, too.