THE RETURN OF POWER STEERING 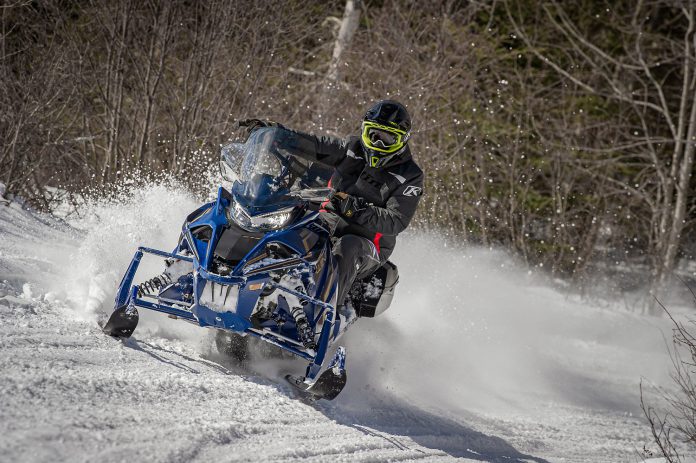 Although power steering for snowmobiles was first introduced by Yamaha over a decade ago, it never took the industry by storm the way it was anticipated.

We clearly remember the first time Supertrax sampled this feature, late one winter as the season was ending. The Yamaha execs who accompanied us on that first ride with the new technology kept completely quiet about it and only told us we’d likely notice something different on this particular Apex with the hood sealed shut. They wouldn’t tell us what the new feature was unless we guessed it.

The then-new EPS system was so subtle it took us about twenty minutes of riding before we were convinced Yamaha had, in fact, put power steering on its menu for sleds for the next season. To clarify a bit, Yamaha had already been using EPS on its ATVs for a couple of years and we knew how good the system worked in that off-road medium.

Once we realized it existed on that Apex, I remember we were very impressed how well it worked to improve handling and steering ease with that somewhat bulky 4-stroke RS platform. For certain, jumping from one sled with EPS to one without showed an incredible difference in response at the handlebars and definitely inspired a whopping helping of rider confidence.

Probably one reason EPS never killed it in the snowmobile marketplace was that at that time snowmobiling was pretty obsessed with snocross and twin cylinder 2-strokes that were above all else light – and torquey like a closed course race sled. Some hard-to-please enthusiasts branded EPS to be a “band-aid” for poor handling and, worse yet, another contributor to excess weight – and cost.

We found, the next season after spending more time with EPS, that the EPS Yamahas were an incredible pleasure to ride on long days behind the handlebars where late-day fatigue is a factor as the miles pile up. At that time Yamaha’s skis weren’t as good as they are now, but darting and heaviness at the skis was all but erased. Extra weight? Yes, it’s impossible to deny that there was a weight gain – but forget about detecting it. You simply could not sense it in any way.

To be fair, Yamaha never really marketed power steering as a performance enhancer for racetrack-type sleds. Rather, the focus was on touring sleds, mid-rangers and the Apex. If you never rode any of those Yamahas, it’s pretty hard to judge EPS fairly. The main thing is: Owners who added EPS absolutely loved it in a big way and have long been begging Yamaha to bring it back.

This year, Yamaha has answered the call of its market and brought power steering to a cross-section of its 2022 sleds. The difference this time is EPS is offered in the SR chassis (SideWinder) as well as certain RS models and the VK Professional.

We had the opportunity to ride a SideWinder last March with EPS and felt it was even better than the EPS Yamaha had offered in its first run. This time the feedback at the bars was even more subtle and seemed to provide more trail “feel” to the rider at the grips. Some of this renewed sensitivity could be due to the use of Yamaha’s unique STRYKE skis. These boards have made a huge improvement to Yamaha’s handling whether combined with EPS or not.

Will EPS be a major factor in sled sales and inspire the competition to add it to some of their premium models? Dunno. However, we think Yamaha’s blend of offering it on its premium utility sled, it’s largest touring-targeted models and some versions of the SideWinder is a safe and efficient strategy.

Keep in mind, those who want EPS want it bad and will never be convinced it’s an unnecessary addition to their 4-strokes.

Kent Lester
Kent Lester is Co-Publisher of SUPERTRAX Magazine and a regular contributor to this website.
Previous articleSKI-DOO OXYGEN SE HELMET
Next articleBUYING USED OR NON-CURRENT MAY BE YOUR BEST OPTION