THE NEXT BIG 4-STROKE 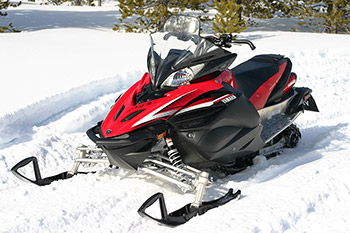 We’ve been wondering what’s going on in the industry with extreme performance 4-strokes.

The naturally aspirated Apex is really in a category of its own and riders who own one are absolutely enamored with it. That sweet 998cc four is an incredible engine and has a longstanding reputation for reliability.

The problem with the Apex is twofold. First, it’s getting long-in-the-tooth. It’s approaching its tenth year of production and the Apex platform was really a more rider-forward modification of the original RX-1, first seen in 2003. That’s a long time for original technology – especially in the sno-mo-biz.

Second, although the sled is built mostly from aluminum, it is very heavy compared to sleds that have been introduced the last five years. Yamaha knows this but by the time the Apex was pared down in weight to a more competitive level, the company might as well just start with a clean sheet of paper.

We think a completely new joint venture sled is under testing right now. We presume it will be based on a Cat platform and (hopefully) will use the 998cc Apex engine.

Then there’s Ski-Doo. BRP is way overdue to introduce a hopped up 4-TEC. Right now, at 130-hp, this 1170cc mill is a rocket, generating impressive top end. However, it has a few glaring faults, particularly throttle lag and Ski-Doo already has the fully developed cure for the problem (wireless 900ACE).

We think Ski-Doo is poised for a revamp of its big-inch 4-stroke program and any new 4-TECs will offer power in the 150-hp range, targeted at the high performance market and perhaps, even the mountains. The existing engine will remain in more civilized Ski-Doo 4-strokes like the GS and Touring.

If this is true, it’s easy to see why Yamaha is under pressure to bring a new Apex to the market.

Kent Lester
Kent Lester is Co-Publisher of SUPERTRAX Magazine and a regular contributor to this website.
Previous articleWHO’LL BUILD THE NEXT SNO-SCOOT?
Next articleRam and Hibbert Look to Return to Winning Ways