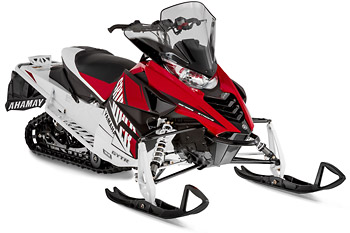 Time for a little fantasy buying. We’re often asked which particular model sled we’d invest in if we were buying one with our own money.

When it comes to Yamaha this year we’ve put some thought into which model spins our crank the most and it comes down to the new DX series Vipers.

Just to be clear though, Yamaha has really messed up our minds by offering that early-season deal on the orange and blue Viper LE series. Those sleds just may be the coolest looking snowmobiles we’ve ever seen.

However, eye candy aside, we just can’t ignore the appeal of the DX series, particularly when it comes down to the RTX (129) and LTX (137) versions.

Why do we like these sleds so much? Actually, it’s all about shock calibration. After riding Vipers in both track lengths for a full season now, we’ve confirmed our thinking that the coilover shocks on this base model Viper are just about perfect for trail riding and occasional off-trail ventures in powder.

The skidframe shocks are pretty much the same as the more serious SE and LE versions of these sleds but the compression damping is set about 30-percent lower and ride compliance is flat-out excellent.

We’re not experiencing bottoming or any bad behavior even with the selection of Supertrax and SnowTrax wild men (and women) who put in seat time on these sleds.

Just to ease our minds, this year Yamaha is offering the DX Vipers with very cool red-white paint and graphics – actually cooler looking than the SE models had last year.

Oh, and we need to talk about windshields. The DX series Vipers all come with a real windshield. It’s just about the perfect height and keeps the rider warm and protected while looking very slick, too.

Hey, why wouldn’t we love the DX best? It’s warm, it rides great and has the same power package as the pricier Vipers.