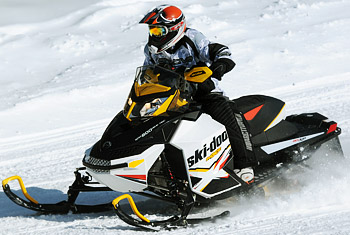 Usually by this time of year, the focus of most snowmobilers has moved from what’s for sale in the showrooms to what will be offered next fall.

This year, snowmobile buyers have a unique situation because there aren’t many non-current year sleds left over at dealerships.

This shortage of available new sleds by the middle of this season has intensified the desire of enthusiasts to find out more about the 2012 models about to be revealed.

Both Polaris, Ski-Doo and Yamaha have gotten an early-season jump on things by revealing all or some of their 2012 models and technologies they’ll be showing us next season.

There’s new stuff coming from both Cat, too, but it won’t be shown off until early March.

Here’s the good news, Supertrax has actually ridden all the new models and has some pretty decisive opinions on what’s available next year.

We can tell you this: We’re impressed with not only the number of changes next season but the depth to which the OEMs have gone to improve, re-invent and expand their model line-ups.

2012 is going to be a very exciting year and with the demand for sleds growing and the non-availability of one and 2-year-old sleds out there, we think the sell-outs of 2012 models will be very fast.

We’re not sucking up to the OEMs here, but honestly, if you’re thinking about buying a new sled next year, you need to get on the stick and take advantage of any of the manufacturers’ early-buy programs.

We can guarantee there will be a lot of disappointed shoppers next year who waited… and missed the opportunity to early-order a sled.

Those will be the one’s you’ll see riding duct-taped sleds with primer on them.

Find out our impressions of all the 2012 sleds in the March Zinio edition of Supertrax.