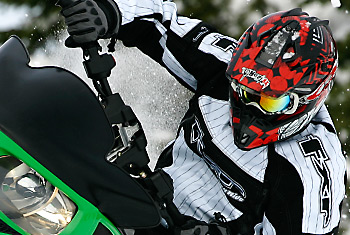 Although our initial riding experiences were very brief to say the least, we’re already pretty amped about the new line-ups from Yamaha, Polaris, Ski-Doo and especially, Arctic Cat.

Cat has made sweeping changes for 2012 and the other three all are offering new technology and some pretty slick new model changes and upgrades for the coming season.

Every year about this time we get a chance to get more saddle time when we head to some exotic mountainous location to photograph the details of every new sled and, more importantly, to ride them more extensively.

This year “Snow Shoot”, the long term event’s name, will be held in West Yellowstone, Montana and each member of the snowmobile media will be taking crews and cameras there to get enough footage to cover the next season of print, web and TV.

The four OEMs bring their 53-foot trailers and a complete model list of 2012 sleds in all conceivable variations and we spend four to five days examining the details, test riding and shooting all kinds of pictures.

It’s hard work and we cram a lot of action into a short time but it gives us enough exposure to the sleds that we can communicate clearly to you what works and doesn’t work for the upcoming season.

Our last embargo (these are agreements we sign with the manufacturers promising we won’t tell all about the new models until we get a green light from them) is lifted March 10, 2011 and we’ll be covering everything in explicit detail in the March online edition of Supertrax.

In the meantime, between now and March, keep posted to this website for details on the sleds that are cleared on the OEM embargoes.