Still Big Demand For A SnoScoot! 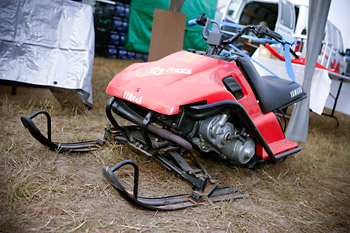 A story recently resurfaced from our 2011 archives on this website that was pretty thought provoking.

The article was entitled: Is Yamaha Bringing Back the SnoScoot?

Get real here: The SnoScoot has been out of production for over twenty years and we heard that the company had destroyed all the dies and tools to build them a decade ago. Not much chance of that particular Yamaha returning to production.

What’s truly an enigma is that the SnoScoot was never really a big seller back when it was in showrooms. True, people who bought them loved them for their teenaged riders and, novice women riders loved their lightness and maneuverability. However, not enough people were interested to the extent they would pay the bucks to own one.

What’s surprising is that this recent article re-surfaced with so many readers responding to it at the beginning of the season two years after it was posted. Read the comments from Facebook; there’s more of them and more “likes” than we get with some of the current hypersleds we write about.

This tells us there’s a lot of interest in a) finding a used SnoScoot or b) buying a mid-sized sled for kids and beginners to move up to from their mini-sleds.

One reader commented it was a bummer that the snowmobile industry produced all these little 120cc mini-sleds and built a bunch of rabid potential enthusiasts who race and ride them and then hung them out to dry with no sleds for them to buy when they got too big for their mini. We say “amen” to that.

You know, Yamaha has incredible access to fabulous 4-stroke scooter engines and drivelines. Using some of the old rider-forward SnoScoot design parameters, one of these EPA approved 4-strokes producing about 30-hp would be an exciting prospect – especially if it could be priced less than $6000.

Kent Lester
Kent Lester is Co-Publisher of SUPERTRAX Magazine and a regular contributor to this website.
Previous articlePolaris Announces Buyback of Fuji Shares
Next articleWHAT THE HECK IS PD?