SLEDS ARE SELLING OUT EVERYWHERE! 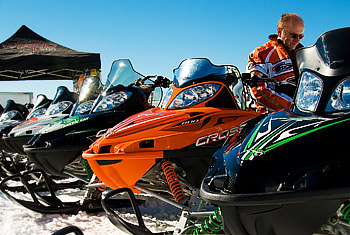 Since we received early winter snow in substantial amounts clear across the snowbelt this year it’s put some big happy smiles on the faces of snowmobile dealers.

Both new and non-current model inventories are emptying quickly as ownersare beating the bushes looking to fulfill requests from snowmobilers looking for specific models.

It’s still really early in the selling season and some of the dealers we’ve spoken to are already down to their last half dozen sleds.

One long-established dealer we talked to told us he hasn’t seen anything like this in decades.

Normally, most dealers are left with about half their new-sled allotments unsold around the middle of December and the rest moving out over the balance of the winter.

This year, the “bargain” leftover sleds are mostly long gone and the 2011’s are moving out in big numbers – if they can get them.

We think an important factor in all this action is the fact large numbers of potential buyers have been holding onto their old sleds during the last two and a half years and now that they can get more use out of their sleds (because of all the snow), they’re nearly forced to move into a new, more reliable one.