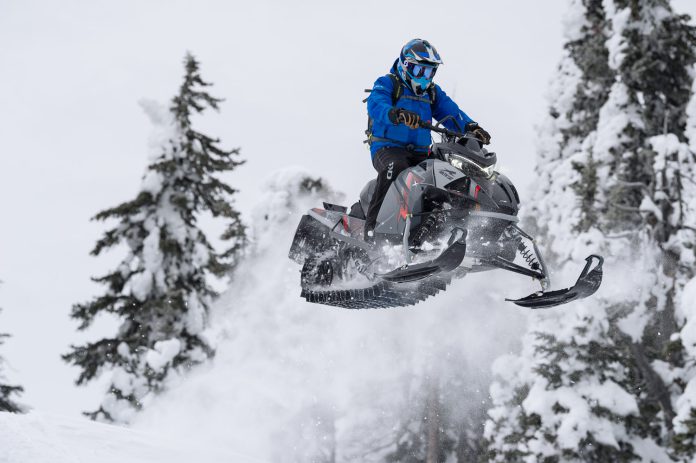 Snowmobiles are split into several segments: mountain, trail, touring, utility, crossover and so on.

In each of these categories there have been unique technologies developed over the last decade or more. Some of those technologies have transferred from one category to another – but there are several that have remained unique to the class they were invented for.

So, is there any hope some of this technology could potentially transfer over to another category?

Some of our readers have been asking this question for a while – and it’s for that reason we’ll look at a few well-known technologies and estimate whether they could transfer somewhere else.

Arctic Cat introduced the Alpha One single beam skid a couple of years ago and it’s been a very successful hook in the mountain marketplace. The idea is that, in deep snow, a flexible track wrapped around a single slide rail running down the middle of the sled allows the snowmobile to pivot faster in powder and also to sidehill with less effort than a 2-rail setup.

Could a single rail work on a trail sled? The truth is, this tech is pretty much designed to work in powder and not so much on trails and hard pack. Although it could be slightly lighter – even a simpler design to manufacture, with a few less parts than a normal skid, we just don’t think the single rail skid will cross over to trail use. Why? Our experience suggests there isn’t a trail handling upside to a narrower skid.

Ski-Doo’s SHOT batteryless starting system has been introduced into the mountain and deep powder end of the biz – and works extremely well, eliminating the need for a battery. Energy is stored up in a capacitor system and once you’ve pull-started the sled at the beginning of your day’s riding and built up sufficient charge, you just hit the SHOT button on the handlebars and the sled uses the stored charge to fire the engine.

Although this system works really well on mountain and some crossover sleds, we’re just not sure the tech will transfer over to trail riders. Certainly, some riders would like to shave a few pounds of weight, but the convenience of electric start and not having to pull start a sled – ever – is pretty attractive.

The new Polaris MATRYX has some interesting storage innovations this year and it’s surprising how many riders we talk to absolutely hate the fact their old sled just doesn’t have enough places to stow things. The idea of uber-storage actually comes from the utility sled market and utilizing some hidden corners on the sled, like behind the instruments and under the seat, to stash goodies seems like a no-brainer.

This seems like such an obvious innovation, we can’t believe the market has avoided it for so long. Although those big 20-wide workhorse sleds use a flip-up seat to gain extra storage space, the MATRYX has set the bar higher for onboard storage for trail sleds and even for crossovers. We’re pretty sure new designs from every OEM will include some new, eyebrow-raising tech to ensure riders can haul their gear onboard – and that includes on mountain sleds.