SKI-DOO’S REAR SUSPENSIONS UP THE ANTE IN 2012 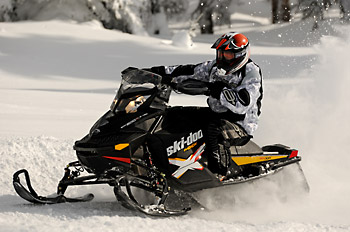 For those who have ridden any XR or XP Ski-Doo equipped with an SC-5 skidframe the last two years, you may be scratching your head and saying: “What could they possibly do to improve a suspension that works so good?”

We agree, actually, and it was with a certain amount of skepticism we approached the 2012 MX-Zx and XR-S equipped with Ski-Doo’s new r-Motion rising rate skidframe.

When we had a chance to ride it, of course, we spent our first half hour trying to scout out the gnarliest, most “washboardy” section of trail we could find so we could report back our findings.

Everything we say about this skid is tempered by the fact that, in our opinion, Ski-Doo didn’t have to do anything to deliver industry-leading rear suspension results.

However, the rMotion is pretty revolutionary and signifies what Ski-Doo has been very good at doing the past few years.

The company is becoming known for taking some of the best technology it builds and then improving it or even obsoleting it to the point the competition is still trying to catch up with version #1. Remember SDI being replaced by E-TEC? Remember the REV being replaced by the XP?

The result is a skidframe that outperforms pretty much everything else we’ve ever ridden – and it works that way in both low speed stutters and in the huge stuff.

You can tailor the damping and preload settings to absolute perfection with two tunnel mounted controls that make setup very simple and user-friendly.

We’re not sure if this suspension will be offered in all Ski-Doos in the future but we have to say it’s one of the best technical achievements of 2012.

Read more about our test of this suspension and the other 2012 Ski-Doos in the Online Edition of Supertrax (Volume 22#5) available right now on ZINIO.COM.