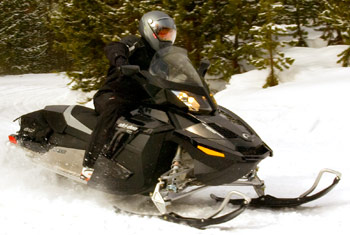 Supertrax has had a chance to put some miles on several of our 2009 press sleds the last few days and one we’re truly impressed with is Ski-doo’s 1200 4-TEC.

Our particular 1200 is a GSX but we’ve ridden this engine in MX-Z models, too. Frankly, we’ve been very surprised at the kind of power this 4-stroke makes.

When Ski-Doo published the 130hp claim, we were a bit skeptical but, after riding it, we’re hooked on the hard hitting power this mill delivers from engagement right up to full throttle.

Initial tip-in, off-idle, is pretty abrupt – likely because there’s gigantic torque being generated down low and once underway, the motor pulls like a tugboat. On top speed runs we’ve been totally impressed with its ability to build speed.

On the lake, this sled will pull very strong digits when it gets over 100mph – actually some of the highest numbers we’ve seen, even compared to some higher horsepower sleds, including 2-strokes.

The 2009 suspension rehab is especially good on these XR sleds and the XP, too. Every one we’ve ridden is a giant step ahead from last year – no comparison.

We’ve been asked already, if the 1200 is a good choice compared to an E-TEC or a PowerTEC. Well, it’s quieter and smoother than an 800R and doggone close in performance.

There is a weight difference that’s noticeable when you’re in powder. But if you’re trail riding, there just isn’t a sweeter combination. Frankly, I’d buy this sled with my own money.