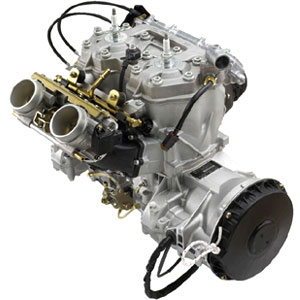 With four injectors located in the transfer ports, fuel only comes into play at the last millisecond (at less than 30 degrees of crank rotation) before the intake port closes. More important is the rapid injection of fuel only after the exhaust port has been shut by the rising piston. All this techno-jargon means this: no wasted fuel is spewing into the pipe.

SDI relies heavily on a knock sensor to back fuel mixture down to extremely lean levels. The system’s ECU recalibrates itself to verify fuel quality every single time the engine is started. After selling thousands of SDI’s the past four models years Ski-Doo’s 600 has proven to be bulletproof, incredibly fuel efficient and plenty powerful at a claimed 118 horsepower.

It’s recommended you use high quality synthetic and we think that’s good advice, considering the way the engine sips lube. We’ve been amazed at how little oil an SDI uses during a day’s riding. Having said this, it’s something you have to look after that a 4-stroke doesn’t require.

Fuel economy recorded the past three seasons verifies consistent mileage in the low 20’s. The EPA emissions numbers are interesting and demonstrate the inverse hydrocarbon to carbon monoxide ratio 2-strokes often demonstrate when compared to 4-strokes of similar power. The 600 SDI produces 70.2 gpkw of hydrocarbons and 126.5 gpkh of carbon monoxide.

For those who want more beef this year, there’s Ski-Doo’s impressive 800 PowerTek engine. This 138hp cylinder reed 2-stroke is a bit of a marvel in the industry as it doesn’t use the electronic wizardry of SDI to get clean exhaust ratings.

With carburetors, careful tuning and a detonation sensor it ekes out a miserly 72.8 gpkh on the hydrocarbon scale and 200 gpkh of carbon monoxide. Although not the cleanest certified engine in the business, it still falls well within the parameters set by the EPA without incurring cost-ups from expensive technology.

It’s likely this is the last year for this 800 as consumer testing is currently taking place in the mountains of our continent on a completely new Rotax engine – the 800R. It’s lighter, more efficient, cleaner and cranks an incredible 152 ponies, again using only carburetors.

Click the banner at the top of the page for more about Ski-Doo’s 2-TEC SDI engines.

Supertrax Onlinehttps://www.supertraxmag.com
Check back frequently for new content and follow us on social media!
Previous articlePOLL RESULTS
Next articleFinally, A Yamaha Rumor!!