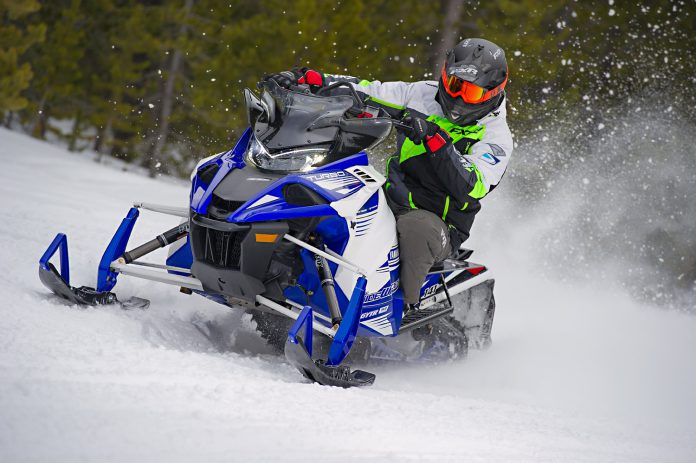 Yamaha focused on reducing rotating weight with its turbocharger – a strategy aimed at lag-reduction and quick spooling to build boost.

The turbo body itself is very light and efficiently cast while ceramic ball bearings are used on the lightweight turbine. Incorporated into the turbo-plumbing is a free-flowing, header-like cast aluminum exhaust manifold – no doubt to handle the voluminous heat generated by a pressurized engine.

This is an incredibly smooth engine. Its 120-degree firing, 3-cylinder design definitely contributes to that smoothness but this engine takes it skyward a whole notch.

Riding a 137-inch Sidewinder SE last winter, we immediately noticed how velvety this engine is at all RPM levels. It’s almost a paradox when you realize the track under you is churning like an Osterizer on nine and snow is being sand-blasted out the snowflap like a snow-Vesuvius.

Meanwhile, this engine is completely manageable and only gets crazy when you, the operator, feed in too much throttle or act stupid with it. Otherwise, it behaves like a neutered Schnauzer.

Here’s where this operating behavior pays off: If you’re riding medium rough trails at a brisk pace, with former turbocharged sleds in this power range we experienced some difficulties with throttle control as your body, in particular, your right thumb responded to the terrain.

The last thing you want is an unpredictable, sudden surge of 180 stallions when you’re off balance or negotiating a series of whoops. The Sidewinder is completely at ease here and it puts the rider at ease, too.

Second, we noticed the balance of the Sidewinder platform as a whole is very good in rough trail situations. Although there is significant weight at play compared to a big-inch 2-stroke, the engineering team has been able to find a sweet spot where the sled doesn’t feel overly heavy between the skis.

Yes, it does feel heavier than a 2-stroke, but not cumbersome or awkward – even when you’re drilling moguls. We suspect much of this is due to precise engine placement and maybe somewhat about balancing the skidframe’s front arm spring pressure to deal with the extra weight up front.

Either way, this sled is a pleasure to ride and it’s one of the reasons Yamaha has made it available in its first year with so many track variants, shock packages and market pigeon holes.

We also noticed the backshifting advantages of a roller secondary clutch on a Yamaha spewing so much power. The new primary is also a good design. It’s a bit larger than the former Yamaha primary and delivers an overdrive situation when the clutches are shifted out.

For sure, this engine will have no problem pulling the overdrive at max speed.

Supertrax Onlinehttps://new.supertraxmag.com
Check back frequently for new content and follow us on social media!
Previous articleCAT’S FUTURE IN THE SLED BIZ
Next articleGREAT SLEDS FOR TWEENERS