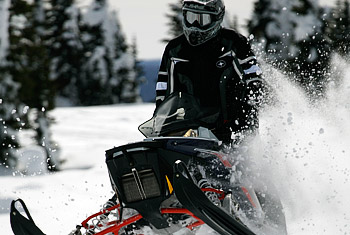 It’s crazy, but at this time of year, when everyone is just starting to get out on the snow for the new season, we start postulating about the next year’s sleds. Weird.

2011 was a big year for Polaris with 15 new model variations hitting the snow and we fully expect some more new stuff from Roseau, this year.

Reason? The company is gradually switching over to its new Pro-Ride platform which is lighter, more rigid and more economical to build than the IQ chassis.

This doesn’t necessarily mean all the new sleds will be RUSH models. The 2011 Pro-Ride RMK and Switchback Assault Polarii proved this new platform works amazingly well with a conventional shock-in-skid rear end, too.

All that being said, we think Polaris will add at least two new RUSH models, we’re thinking with a longer track (136-inches), to satisfy the trail-focused end of the crossover market. These sleds will likely be powered by both the SDI Cleanfire 600 and the new-this-year 2-injector 800.

This is a bit of a stretch but we also think there’s something happening in the 4-stroke end of things at Polaris. The IQ Turbo, although a very appealing 4-stroke, has pretty much reached the end of its life cycle and, although Polaris hasn’t been making much ado about 4-stroke snowmobiles lately, we think it has something fresh up its corporate sleeve.

We can’t help but think there was some provision made in the design of the Pro-Ride front clip to accommodate some sort of 4-stroke engine. This could be a cool sled: A 4-stroke Turbo RUSH making 140 horsepower. Hmm.